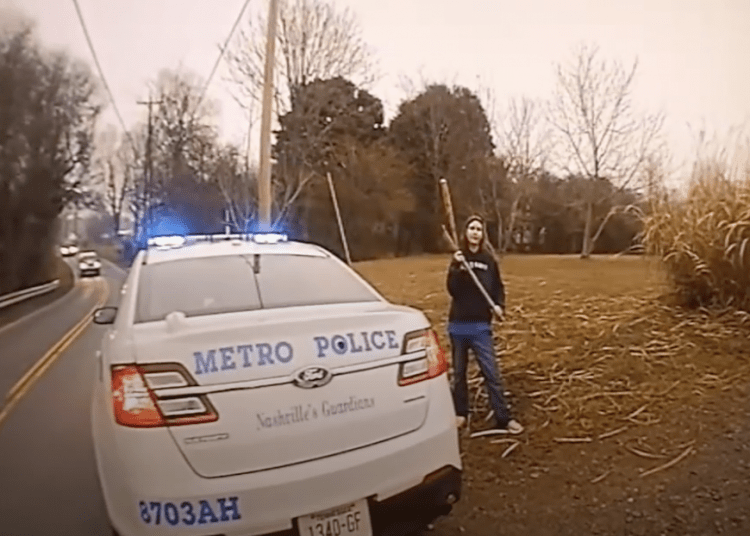 NASHVILLE, Tenn. — Metro Nashville Police shared details and body camera video of a woman who was shot by an officer after charging a fellow officer with a pick axe and baseball bat, according to reports.

Department spokesman Don Aaron said three officers responded on Friday, March 12, to 2800 Greer Road for a call of a woman who was making suicidal statements and that she wanted the SWAT team to shoot her, WZTV reported.

Melisa Wooden, 33, was shot by one of the responding officers after she charged another officer with a pick axe and baseball bat. She was transported to Vanderbilt Medical Center where she is in stable condition.

Body camera video by one of the officers captured the woman squaring off with law enforcement as they arrived. She admitted on video to drinking but continued to ignore requests to drop the weapons.

Wooden’s mother became involved in the situation, also trying to calm her daughter down, telling police “she’s a good kid, she’s messed up in the head.”

However, Wooden ignored pleas to put down the weapons, charging at the officer wearing a body camera and prompting one of the officers to open fire.

Police say the mother’s involvement did not help diffuse the situation and agitated Wooden but commended the efforts by Field Training Officer Ben Williams in his attempts to talk Wooden down, WZTV reported.

Williams deployed his Taser, but police said it did not have the desired effect. Furthermore, police said the mother’s involvement caused officers to “move in” towards Wooden, which escalated the situation more than it would have otherwise.

Both the Tennessee Bureau of Investigation and Metro Nashville Police will conduct an investigation into the shooting.