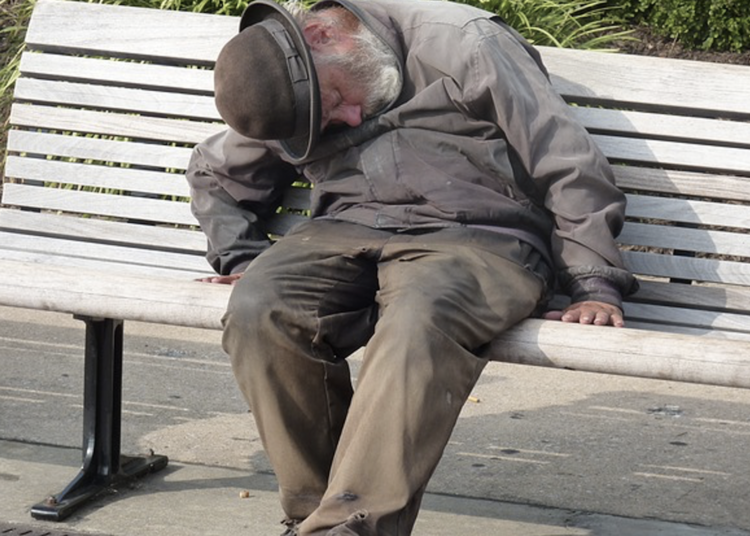 Experiencing Mr. Stinky! You kinda had to be there, so follow me…

Back when homeless people were hobos, drunks were winos, and “substance abusers” were hypes, I pounded a classic foot patrol beat on San Francisco’s gritty Mission Street. After 3-4 years, I literally knew everyone on my beat; bad, good, or wack-a-doo.

I worked out of the Mission District Station at 1240 Valencia St. Mission was a one-story brick and cinder-block bland building with 3-inch-thick bullet proof windows, and a 20-foot chain link fence on the roof.

The fence was because early on some radical group had thrown an explosive satchel charge on top of the roof during line-up, trying to kill the 124 cops that were in the building. The bomb didn’t go off, so the city put up a fence to make the next attempt slightly more difficult.

On one side of the station was a store front church, while on the other was a decrepit apartment building that in turn was next to an adult sex-toys store, called “ Good Vibrations.”

We’d periodically get some merchants complaining about this or that, so the captain would tell the lieutenant, and he would lean on the street sergeant, who in turn would tell us, “It’s the weekly sweep time boys!”

Mitch would grab the BIG paddy wagon, and the six beat cops would ride its rear bumper while picking up the usual miscreants more or less at random.

We’d do a decent job of disarming them before tossing them in the wagon, and in that, the prisoners and the cops knew how to play the game, we didn’t get any big surprises.

I forget his real name, but if I called him “Mr. Stinky,” and mentioned that he NEVER took off any of the 3 pairs of pants, or the five overcoats he wore, everyone knew who he was.

Stinky was face down on the pavement across the street from the food market at 22nd when we grabbed him. Mitch did a cursory high-risk pat search for weapons, or bottles of cheap wine, and finding none, cuffed him up and put him in with the other 15 bums in the back of the wagon.

At the station, we had a regular assembly line thing going where the arrestees would line up, get a photo taken, have their meager belongings tossed into a brown grocery bag, and then shamble into the drunk tank.

Stinky shuffles up, and is so out of it, he can’t empty any of his 11 coat pockets. Mitch leans him against the booking counter and begins taking handfuls of God knew what out of the pockets.

Suddenly Mitch jumps in the air, yelling all sorts of Germanic based profanity, and is yelling, “Something bit me … something M….F….G  BIT ME !!!”

Stinky has a semi-blank look on his face, but says, “Oh, that’s just my lunch.”

I grabbed the offending coat, (while wearing gloves!), turned it up-side down, and shook it.

About 10 or 15 silver-dollar sized LIVE soft-shell crabs fell out and began scuttling around the booking room.

Stinky had apparently stolen them out of the fresh seafood bin at the fish market up the street before we nabbed him.

To say that hilarity ensued would be vastly understating the commotion that followed, but suffice to say Stinky didn’t get his lunch, and Mitch never lived it down.

The lieutenant had Mitch prepare a Line Up Briefing presentation on the “importance of proper searches during custody” later that week. There wasn’t a dry eye in the house when he finished

For a VERY large guy (think interior lineman) Mitch had a very subtle and deft touch when speaking in public. He made eye contact with the audience, paused at the correct times, and looked down his shaggy mustache just like Groucho Marx doing a one-liner punch line.

Giving tribute to the sense of humor that you had to have to work in that era, a few weeks later when all of us had lunch at Miz Browns Restaurant, Mitch ordered the extra-large Crab Salad.

When Stella the waitress asked him how he liked it, he just smiled and said: