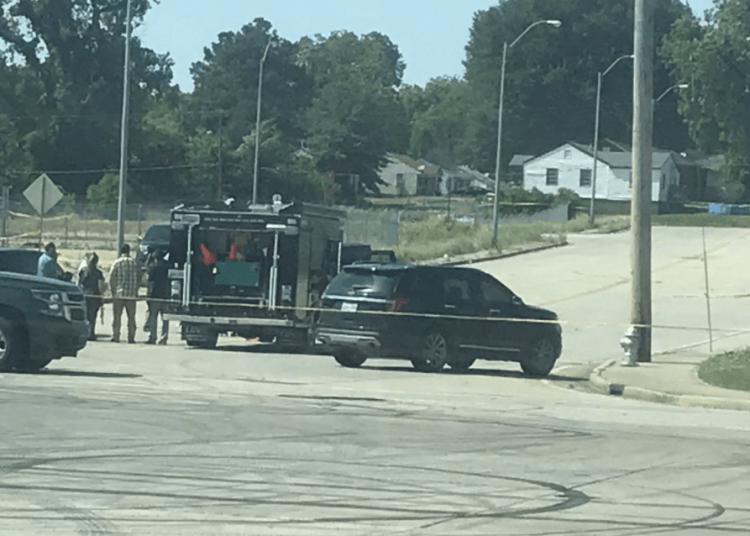 SOUTHAVEN, Miss. — A suspect is on the run after after shooting a Southaven, Mississippi police officer near the intersection of Riverport Road and West Mallory Avenue in Memphis, Tennessee, according to reporter Siobhan Riley.

We just confirmed From DeSoto County Sheriff an officer was shot. Suspect got away on foot.

The wounded officer has been transported to Regional One Health Medical Center, Yahoo News reported.

Both the Memphis Police Department and the Southaven police chief have arrived at the hospital with several police vehicles in the area, according to a tweet from Riley. The officer’s condition is unknown at the time of publication.

At least 10 vehicles from Southaven and Memphis Police are parked outside Regional One. pic.twitter.com/TYtsUMXt2k

The shooting suspect has reportedly barricaded himself inside a home in the Palestine area of St Francis County, Arkansas. WREG-TV’s Luke Jones reported that the man shot at St. Francis County deputies earlier Tuesday and led a police pursuit in Alabama on Monday which had to be terminated for unreported reasons. Jones noted that the suspect had fled in the South Haven police officer’s vehicle, Yahoo reported.

Man barricaded in home in Palestine area of St Francis County after shooting a Southaven police officer and stealing his car. FBI on scene. @3onyourside pic.twitter.com/deKW6CiC8R

Told suspect shot at St Francis County deputies earlier. Yesterday, we’re told he led police in Alabama on a pursuit which had to be called off. @3onyourside pic.twitter.com/KQIBqWx4hj

A witness told Fox 13’s Greg Coy that she heard about six gun shots before police arrived, according to Fox News.

#BreakingNews woman tells me she heard about 6 gun shots before police arrived. This is other end of active scene where Southaven Ofc wounded trying to arrest suspect in Memphis. Team coverage @FOX13Memphis pic.twitter.com/tmPVHU6dXU

#developing Just heard @FBIMemphis and @ATFNashville assisting in the investigation of shooting and wounding of Southaven Ofc. pic.twitter.com/QoKi3Ji9X6

The Memphis FBI and Nashville’s Bureau of Alcohol, Tobacco, Firearms and Explosives are reportedly assisting local police with the investigation.

UPDATE: The suspect was captured in Arkansas. Read more.