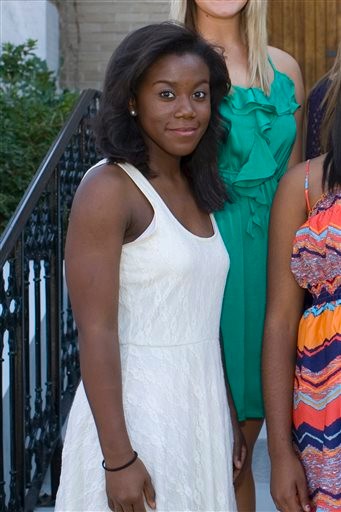 OXFORD, Mississippi (AP) — A young US couple who are charged with attempting to join the Islamic State were ordered held without bail Tuesday, pending federal grand jury action on the charges.

Twenty-year-old Jaelyn Delshaun Young and 22-year-old Muhammad "Mo" Dakhlalla, who were arrested at a local airport just before boarding a flight with tickets bound for Istanbul, went before a U.S. Magistrate Judge on Tuesday in Oxford, Mississippi.

In this Oct. 5, 2012 photo, Jaelyn Young, an honor student at Warren Central High School, poses for a photo in Vicksburg, Miss. Young and another Mississippi resident were arrested on Saturday, Aug. 8, 2015, on charges that they were trying to travel abroad to join the Islamic State militant group. (Melanie Thortis/The Vicksburg Evening Post via the AP)

The judge denied bail, saying that even though the pair have never been in trouble with the law and have relatives willing to oversee their home confinement, their desire commit terrorism is "probably still there."

Urging the court to keep the suspects in custody, Assistant U.S. Attorney Clay Joyner likened them to Boston Marathon bomber Dzhokhar Tsarnaev, saying that like him, they could commit violence with knives, vehicles or homemade weapons.

FBI agents arrested them at a Mississippi airport, filing criminal charges that both were attempting and conspiring to provide material support to a terrorist group, a federal crime punishable by up to 20 years in prison and a fine of $250,000.

An FBI agent's affidavit said both confessed their plans after their arrest. Defense attorneys declined to comment after the hearing, but told the court that the material didn't prove either had committed a crime.

The families of Young and Dakhlalla were still trying to come to grips with the accusations.

Dakhlalla's family is "absolutely stunned" by his arrest, said lawyer Dennis Harmon, who represents the family.

Dakhlalla's father, Oda H. Dakhlalla, is the longtime imam of the Islamic Center of Mississippi in Starkville, Harmon said, and has previously been reported to be a native of Bethlehem, in the West Bank. His U.S.-born mother, Lisa Dakhlalla, has run a restaurant in the area and sold Middle Eastern food at farmers' markets.

Court papers say both Young and Dakhlalla are U.S. citizens. Mississippi State University spokesman Sid Salter said records show Dakhlalla graduated in May with a bachelor's degree in psychology. Salter said Young was enrolled until May as a sophomore chemistry major but has not enrolled for classes since.

Young's father, Leonce Young, is a 17-year police veteran. He and his wife were present Tuesday for the hearing, but declined to speak to reporters afterward.

The government says FBI agents began interacting online with Young in May about her desire to travel to Syria to join the group. It says her Twitter page said the only thing keeping her from traveling to Syria was her need to earn money.

"I just want to be there," she is quoted as saying. In later conversations peppered with Arabic phrases, she said she planned a "nikkah," or Islamic marriage to Dakhlalla so they could travel without a chaperone under Islamic law.

In June, the first FBI agent referred Young to a second agent posing as an Islamic State facilitator. The charging document says Young asked the second agent for help crossing from Turkey to Syria.

Young touted her skills in math and chemistry and said she and Dakhlalla wanted to be medics treating the injured. Later, the charge says, she told the second FBI agent Dakhlalla could help with the Islamic State's Internet media, saying he "really wants to correct the falsehoods heard here" and the "U.S. media is all lies when regarding" the group, which she called by its preferred internal name, Dawlah.

Dakhlalla told the first FBI agent online in June that he was "good with computers, education and media" and that his father had approved his marriage to Young. In July, the charges say, he expressed a desire to become a fighter for the group. "I am willing to fight," he is quoted as saying.

Young later told the FBI that she and Dakhlalla got married June 6. She also expressed a desire to "raise little Dawlah cubs."