Minnesota police officer involved in fatal shooting after getting rear-ended, attacked by another driver 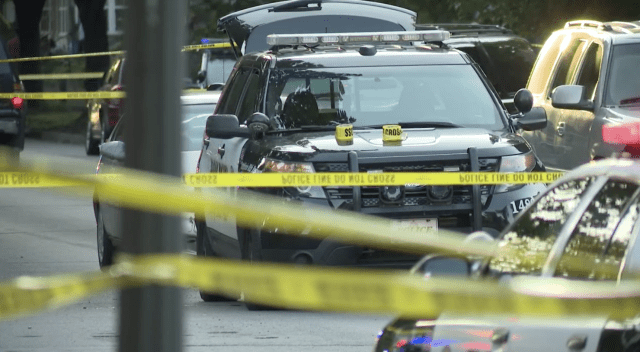 ST PAUL, Minn. – A Minnesota police officer was rear-ended, then attacked, which ultimately led to a fatal encounter with the other driver Sunday evening, police said.

The incident occurred about 5:50 p.m. at the intersection of Thomas Avenue and Griggs Street, about four blocks north of University Avenue.

The officer “was stopped at the stop sign when he was suddenly struck from behind by another motor vehicle,” St. Paul police spokesman Sgt. Mike Ernster said at a news conference late Sunday night. “The officer exited his vehicle, and was immediately confronted by the driver of the striking vehicle, and a fight ensued.”

A KARE 11 reporter said police told her the striking driver of the police unit “started a physical fight” with the officer.

During the fight, the officer fired his weapon and struck the driver. The man was pronounced dead at the scene; the officer was not injured, MPR News reported.

Neighbors tell me they heard yelling then shots fired. Soon after, a strong presence of St. Paul Police at the corner of Griggs St. and Thomas. @kare11 pic.twitter.com/T4cONzoAQo

The officer was wearing a body camera that was activated at the time of the shooting; he has been placed on administrative leave, which is normal protocol following an OIS.

The names of the officer and the man who died have not been released. The Minnesota Bureau of Criminal Apprehension is handling the investigation, and Ernster deferred most questions to the BCA on Sunday night.

KARE 11 reported that neighbors said they heard yelling, then gunshots, then saw a heavy police presence.

St. Paul Police Chief Todd Axtell wrote in a Facebook post Sunday night that it’s a “sad and difficult night for our city.”

“I know that, regardless of the circumstances, an officer-involved shooting is a tragedy for everyone involved. It hurts and causes confusion and leaves us all with questions that might not be immediately answered,” Axtell wrote.

“But I want you to know that your police department will do all it can to support the officer, who thankfully wasn’t injured. We’ll be there for the officers who were at the scene and his co-workers who know him the best. We’ll reach out to the family of the deceased to offer our deepest and most sincere condolences. And we’ll continue to focus our energy on keeping our city safe.”

“Our hearts are hurt with the news of an officer-involved shooting in our Midway Neighborhood this evening. This tragedy touches all of our lives and leaves our entire community in mourning,” St. Paul mayor Melvin Carter said in a statement.

“Additional information will be forthcoming from the BCA, who has taken the lead on the investigation to begin our search for answers and understanding. My prayers tonight are with the family of the deceased, with the officer involved, and with all who are struggling in the face of this tragedy.”