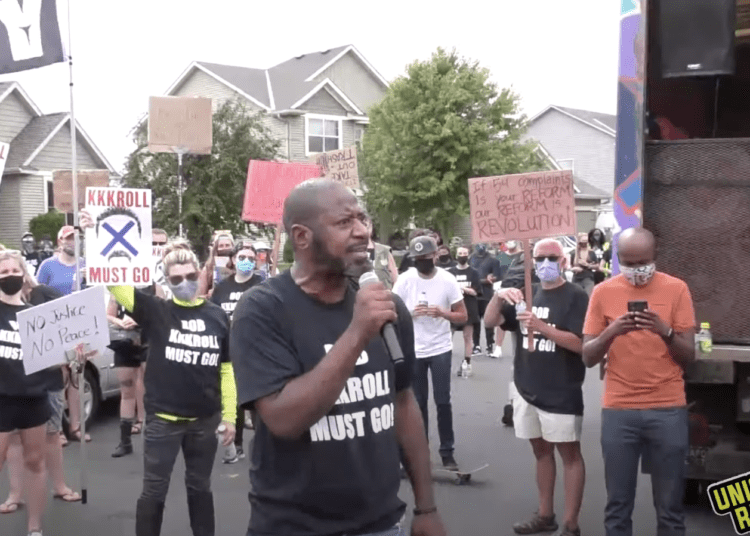 The candidate was also filmed beating an effigy of Kroll and his wife in their own driveway, Law Officer reported.

The Minnesota Police and Peace Officers Association board voted this week to back Republican challengers instead of Democratic incumbents. The association, which represents more than 10,000 officers, had endorsed DFL candidates in both races, Fox News reported.

Minneapolis state house candidate John Thompson stood outside the police union leader’s home and and gave an expletive-laden speech to a crowd of Black Lives Matter demonstrators in August.

Thompson had won his primary in the heavily Democratic district the week before. He faced intense backlash for his remarks and finally offered a forced apology.

“Inflammatory rhetoric is not how I want to address the important issues we’re facing, and I apologize,” he said.

Nevertheless, in a letter to state House Speaker Melissa Hortman released this week, Brian Peters, executive director of the association, said his group is deeply frustrated by the DFL caucus’ support of Thompson after he was filmed beating pinata effigies of Kroll and his wife, a TV news anchor.

This is endorsed Democrat John Thompson, campaigning for State House in district 67A in St. Paul.

This newly emerged video shows him beating an effigy of the Minneapolis Police Union President and his wife in their own driveway on August 15. pic.twitter.com/oJ90WuEmww

One clip shows him saying “You think we give a f–k about burning Hugo down?” In another, he says “F–k Hugo.”

Ken Martin, the state’s DFL chairman, said the party doesn’t condone Thompson’s rhetoric. However, the Democratic leader says he is “grateful” for his work against racism.

Peters confirmed late Thursday to the Star Tribune that his board reversed course on several DFL endorsements, but declined to share the full list for publication. He said members of the police group wanted to see Democrats give a stronger condemnation of Thompson and because he targeted Kroll’s wife.

“The endorsements that we rescinded, my issue was those candidates did not stand up to their leadership and put pressure on and ask why are we supporting a candidate who did this in Hugo,” he told the Star Tribune. “If this is the future of the Democratic Party, my organization is going to support elsewhere.”

At least two Republican challengers announced Thursday that the association had notified them of endorsement.

Posted by Susan Akland For House on Thursday, September 10, 2020

Republican candidate Bill Maresh, running against  Rep. Zack Stephenson, DFL-Coon Rapids, posted a letter on Facebook from the group informing him of the endorsement.

Posted by Maresh For House on Thursday, September 10, 2020