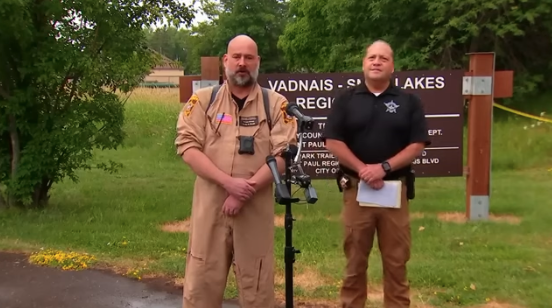 Ramsey County Undersheriff Mike Martin, right, and one of his staff members brief the press. (YouTube)

On Friday around 10:30 a.m. Maplewood police and firefighters were called to a residence in the city. Molly Cheng told authorities that her husband fatally shot himself. He was identified as 27-year-old Yee Lee, according to the Ramsey County Sheriff’s Department in a news release.

Police determined that Lee died from a self-inflicted gunshot wound. Hence, his death was ruled a suicide.

The sheriff’s department said that at about 4 p.m. that afternoon, a relative of Cheng’s called 911 to tell them that she was going to kill her children and herself. As a result, the Maplewood Police Department issued “a statewide alert to “attempt to locate and check the welfare” of Molly Cheng and her children.” Investigators were able to locate her cellphone at Vadnais Lake, according to RCSD.

The overnight search revealed the worst. Rescue crews recovered Cheng’s body, along with her three children from the lake on Friday and Saturday. The deaths are being investigated as a triple murder-suicide, reported the Associated Press.

“Our hearts go out the family, friends, and community impacted by this terrible tragedy,” said RCSD Undersheriff Mike Martin during a press conference at the scene. “The Sheriff’s Office is continuing to investigate the circumstances of this incident to provide clarity and closure to the surviving family members.”

At the time the bodies were discovered, the undersheriff deferred to the Ramsey County Medical Examiner’s Office for cause of death.

Following examination, the medical examiner determined the cause of 4-year-old Quadrillion Lee and 3-year-old Estella Zoo Siab Lee’s deaths were from drowning and smothering. Five-year-old Phoenix Lee’s death was caused by drowning, the Associated Press reported.

No further information has been released and the investigation is ongoing.