Riots Have Erupted In Other Cities 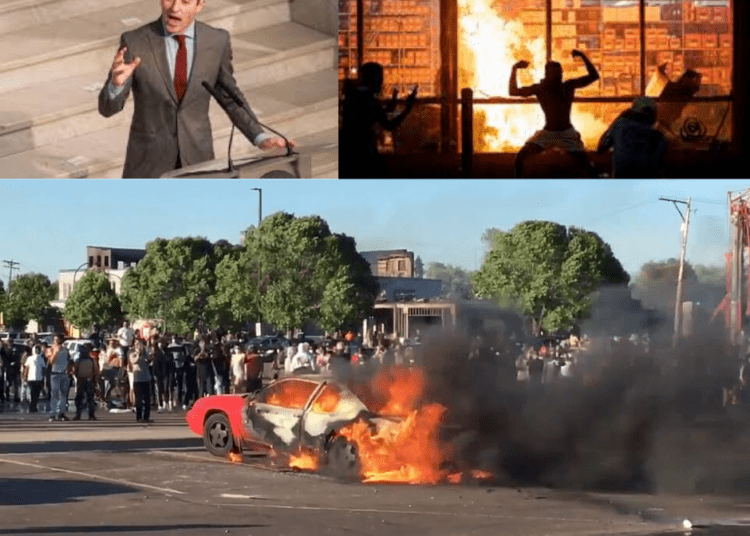 Minneapolis Mayor Jacob Frey has declared a state of emergency as rioting breaks out for the third night in the city while protests over George Floyd’s death spread across America.

Frey declared a local emergency Thursday night due to civil disturbances after the National Guard and state troopers were called in and fires broke out again in stores across the city.

The announcement came as prosecutors warned Thursday there is ‘evidence that does not support criminal charges’ in the case of four cops accused of killing Floyd, sparking fears that the police officers will continue to walk free.

Protests have erupted in other cities over Floyd’s death.

NYPD officers were seen brawling on the ground with protesters as at least 70 people were arrested in the Big Apple.

In Denver, panic erupted when shots were fired at the Colorado State Capitol where hundreds had marched to demand justice over Floyd’s death.

Floyd’s death has sparked outrage, after footage surfaced Monday showing white cop Derek Chauvin kneeling on the black man’s neck for eight minutes until he passed out and later died.

Minnesota Governor Tim Walz activated the National Guard to the city and state troopers have been called in as it braces for another night of violence.

Frey’s emergency declaration will stay in place for 72 hours and allows officials to deploy emergency regulations with immediate effect.

Protesters came out for a third day Thursday in what has been escalating levels of violence and chaos across the city.

“We need to embrace that reality and then we need action … We need a charge of the arresting officer in this case.” https://t.co/ATTdYqG99t pic.twitter.com/Ogb7jdR0ir

Footage showed the Target store being the location for much of the rioting for another day as rioters were seen hurling the retailer’s shopping karts at a police cruiser in the store parking lot.

In the nearby St. Paul, rioters threw rocks and stones at a police car and it was left destroyed.

Protests ramped up across the nation Thursday night as anger grows after arrests have not yet been made in the case.

More than 70 people were arrested in New York City after several cops were attacked by rioters.

Rioters were also arrested for brandishing a knife while another tried to take a police officer’s gun from their holster.

Prosecutors have warned there is ‘evidence that does not support criminal charges’ in the case of four cops accused of killing George Floyd, as they say police can use a ‘certain amount of force – but not excessive’.

At a press conference Thursday, Mike Freeman, county attorney for Hennepin County, condemned the actions of white cop Derek Chauvin as ‘horrific and terrible’, but said prosecutors needed to determine if he used ‘excessive’ force when he knelt on the black man’s neck for eight minutes until he passed out and later died.