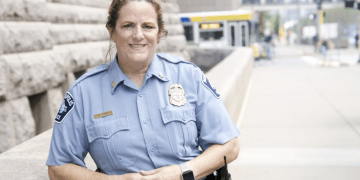 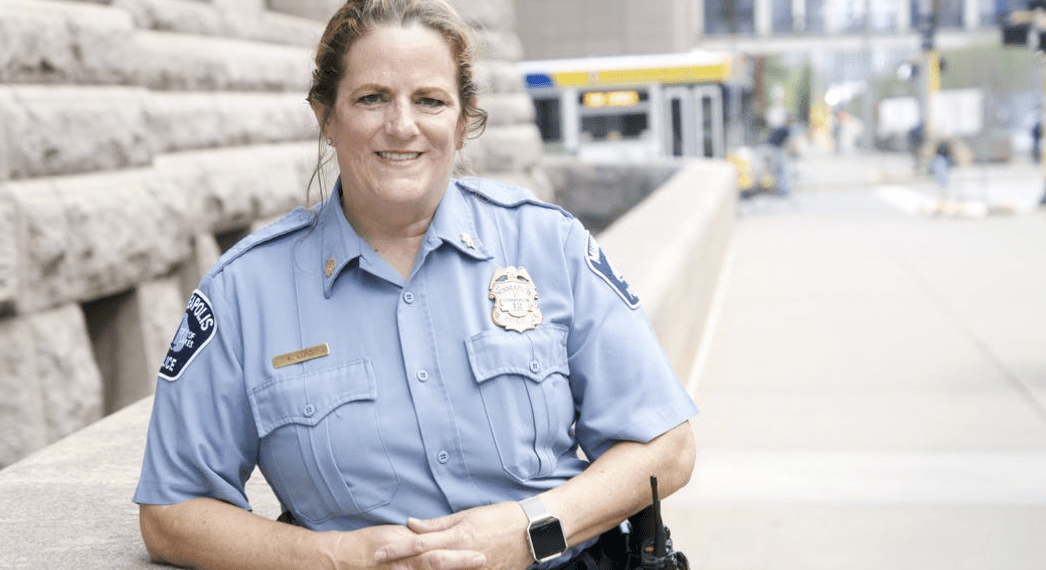 MINNEAPOLIS – A Minneapolis police commander has been demoted after an alleged online uproar over a Facebook post about homicide investigations. The police humor drew self-righteous rebukes from the NAACP and Chief Medaria Arradondo.

The controversy began late  month after Kim Lund Voss posted a photo of a 1990s-era T-shirt that featured an image of crime scene tape and a chalk outline of a body drawn on it, with the words: “MINNEAPOLIS POLICE HOMOCIDE (sic) DIVISION Our Day Starts When Yours Ends.”

The phrase is commonly found on police-themed T-shirts, mugs and other memorabilia, but some considered it insensitive to homicide victims in a city where most are young black men, StarTribune reported.

In a caption with the photo, Voss wrote that she was “organizing the storage room and came across this gem!” adding that “it pays to proof read,” referring to the misspelling of the word “homicide.”

Many people questioned whether the misspelling was intentional, given that the shirt was produced at a time when the city had seen a series of murders of gay men.

A screenshot of Voss’ post became widely circulated on social. As a result, it drew criticism from the Minneapolis chapter of the NAACP and Arradondo, who later apologized, saying neither the photo nor the caption reflected “the values and transformational culture that we are as a department today.”

Voss, who is married to a former Minneapolis homicide detective, later deleted the post, saying that she didn’t intend to offend anyone.

Yet, some circles choose “victimhood” as a way of life, and cannot help but publicly roar their disapproval of something as silly as this.

Minneapolis NAACP President Leslie Redmond wrote on her Facebook page that she was “disturbed” that someone of Voss’ rank would make a potentially racially charged remark, Law Officer reported.

“I do not think this was about the misspelling of the word homicide,” Redmond wrote. “This is extremely insensitive, especially considering the involved demographics.”

The last we checked, Voss hasn’t said much on the disparity that African Americans suffer in Minneapolis in homicides, which is a rate 12 times higher than whites, but give her credit that a t-shirt has her outraged.

Voss wrote on her publicly available Facebook page Sunday that she had been transferred to the South Side Third Precinct, where she will run the property crimes unit. In doing so, she will return to her rank of lieutenant, StarTribune reported.

“As we all know a fragment of a single moment may not give the full context to who I am, what I’m made of,” she wrote in the follow-up post.

Department spokesman John Elder confirmed the move on Monday, adding that it was unclear who would fill her former post as commander of the Juvenile Division, an appointed position. Elder said the department had no further comment on what amounted to “an HR issue.”

Nekima Levy Armstrong, a longtime civil rights attorney who also attended the meeting, said that as a leader Voss should’ve known the harm her words could inflict. The attorney’s piety took aim at Lund.

“Her intentions do not matter. What matters most is the outcome of the actions,” Armstrong said Monday. “As a leader within the Minneapolis Police Department she should have known that posting such an offensive message on social media would be highly offensive … not to mention to undermine public trust.”

In her follow-up post, Voss wrote that the T-shirt was made as a “fundraiser by a private businessman for his business” and that the “words a few have used to describe [me] are not true.”

“My daughter served in the Peace Corps in Africa. My Son is an accomplished musician. We celebrate the musical greats together, from Sam Cooke, Miles Davis, Louis Armstrong and of course Notorious B.I.G.,” she wrote.

“As for those of the LGBTQ community, a community that is rich with love and acceptance, I’m sorry, the guy that made the shirt just didn’t know how to spell,” she added.

Voss was in the running for a highly sought after position when this event unfolded, according to Law Officer sources. Now she’s been targeted, tried, and convicted by an unmerciful few. Sadly, the “sentence” from such a mockery will be difficult to undo.