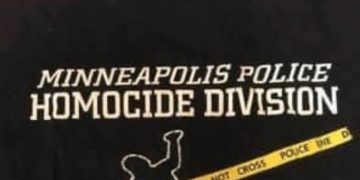 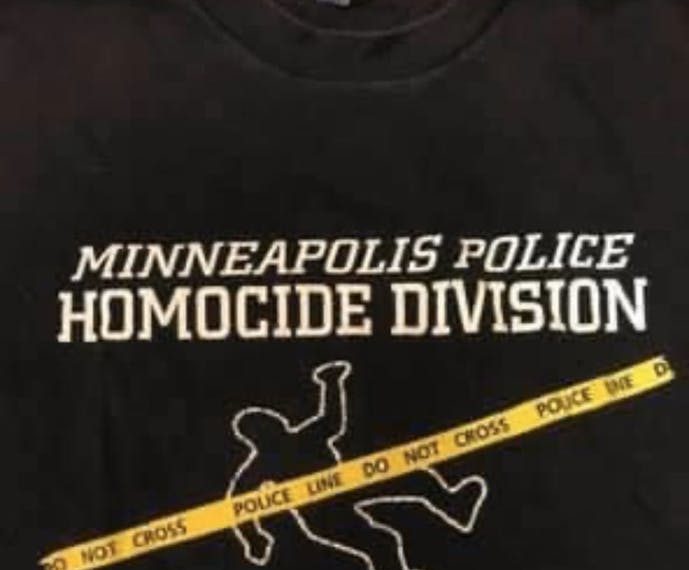 A Minneapolis police commander is in hot water after her Facebook post, depicting an old shirt she found in a storage room brought rebuke from the local NAACP.

Commander Kim Lund Voss posted a photo of an old T-shirt with crime scene tape and a chalk outline of a body drawn on it, and the words: “MINNEAPOLIS POLICE HOMOCIDE DIVISION Our Day Starts When Yours Ends.”

Her post related to the misspelling of the word “homicide” but Minneapolis, the context means very little.

In a caption that accompanied the photo, Voss wrote that she was “organizing the storage room and came across this gem!”

“It pays to proof read before you hit ‘print,’” she wrote on her publicly available Facebook page, referring to the misspelling of the word, “homicide.”

Voss’ post began circulating on Monday, and caught the attention of Minneapolis NAACP president Leslie Redmond, who wrote on her Facebook page that she was “disturbed” that someone of Voss’ rank would make a potentially racially charged remark.

“I do not think this was about the misspelling of the word homicide,” Redmond wrote. “This is extremely insensitive, especially considering the involved demographics.”

The last we checked, Voss hasn’t said much on the disparity that African Americans suffer in Minneapolis in homicides, which is a rate 12 times higher than whites but give her credit that a t-shirt has her outraged.

THE APOLOGY OF LAW ENFORCEMENT

Commander Lund apologized for the photo but the real apology should come from the NAACP and their continued focus on taking police actions out of context and painting them into a racial issue.

Race is a significant issue in Minneapolis.  Blacks commit and are the victims of violent crime at a troubling rate and it seems that groups like the NAACP should not only care about that but be doing something about it.

Instead, they spend their time on attacking the few that are actually trying to stop the violence, law enforcement.

These silly antics are a disgrace to the community and will do nothing to help the citizens of Minneapolis.

Law Officer is the only major law enforcement publication and website owned and operated by law enforcement. This unique facet makes Law Officer much more than just a publishing company but is a true advocate for the profession.
Tags: minnepolisnaacpNewspolice