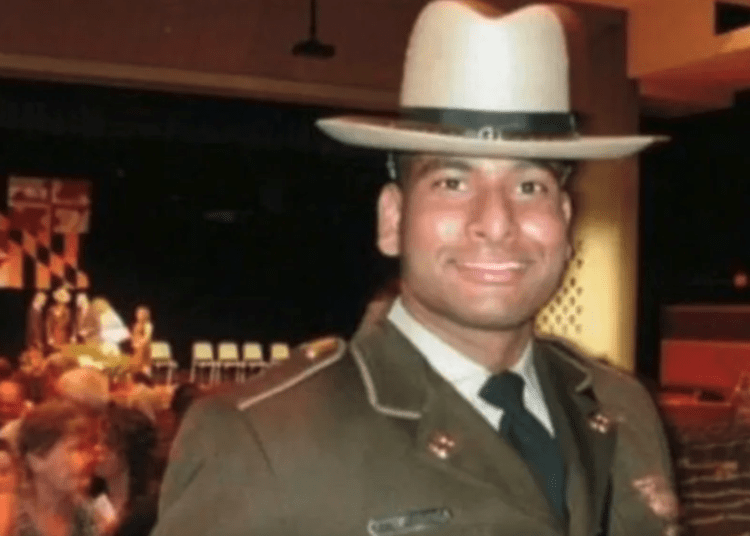 PRINCE GEORGE’S COUNTY, Md. — After two days of testimony, a jury awarded former Maryland State Trooper Ezra Ganeshananda a $106.8 million judgment for the pain and suffering he had endured in the past five years after a man in a Mercedes crashed into the back of his patrol unit on the shoulder of the Capital Beltway at nearly 80 mph.

The judgment is one of the largest in Prince George’s County Circuit Court history, but will be capped due to state law, the Washington Post reported.

Ganeshananda, then 26, was crushed inside his police car. He was in a coma for weeks following the horrific crash. His injuries were so severe it is a miracle he did not die.

The collision occurred on the afternoon of April 14, 2016. Ganeshananda was inside his police cruiser and situated on the right shoulder of the Capital Beltway in Prince George’s County assisting a disabled motorist. The broken-down automobile was directly in front of the patrol unit, with a flatbed tow truck ahead of it. Stop-and-go traffic was inching along to the trooper’s left.

Ganeshananda had graduated from the police academy just eight months prior to the massive collision, according to the news outlet.

About a half a mile behind him, a car had just tapped the bumper of a Mercedes. Instead of hitting his brakes and stopping, authorities said, the man operating the Mercedes accelerated.

Witnesses watched the Mercedes fly onto the left shoulder, striking a barrier, before crossing back to the right shoulder. The car accelerated to about 80 mph.

The Mercedes then violently rear-ended Ganeshananda’s patrol car. The impact was so great that it launched the trooper’s cruiser into the broken down car in front of him at a rate of about 37 mph, according to accident reconstruction.

The Mercedes then skidded into oncoming traffic, was struck by a tow truck, police said, and ricocheted back into Ganeshananda’s vehicle again.

First responders worked for an hour to rescue Ganeshananda from his police cruiser. He was airlifted to Maryland Shock Trauma Center in Baltimore. As would be expected, word spread and a convoy of state troopers flooded the hospital.

The trooper’s injuries were devastating. He sustained broken bones in his neck, spine, right hip, ribs and both legs. Moreover, he suffered a lacerated kidney and liver, impaired vision, internal bleeding, brain damage, heart damage and meningitis. He lost so much blood that he needed five transfusions, the Post reported.

For two weeks, he remained in a coma with his mother, Gnaneswary Ganeshananda, constantly at his bedside.

Ezra Ganeshananda was 26-years-old when he was gravely inured while assisting a disabled motorist on the shoulder of the Capital Beltway. (Courtesy of Peter Grenier via Washington Post)

Ganeshananda’s family reached out to Peter Grenier, one of Washington’s top personal injury attorney’s. He learned after taking on the case that authorities would not be filing charges against the driver of the Mercedes.

Law enforcement officials told Grenier that the accident reconstructionists report of the Maryland state police had been inconclusive, according to the Post.

Hence, the family filed a lawsuit against the Mercedes driver in 2017, eventually obtaining a copy of the state police investigative report.

The Mercedes driver told investigators he was rear-ended and then lost control of his vehicle. He believed he was braking when, authorities concluded, he was actually hitting the accelerator.

The brakes on the Mercedes were not faulty, and the police report concluded the Mercedes driver bore “sole responsibility” for the collision.

The civil case went to trial this fall, five years after the crash. Grenier emphasized the devastation of Ganeshananda’s lifelong injuries. A shunt remains in his brain to drain excessive spinal fluid into his abdomen. At times he struggles with his speech and comprehension. Although he was previously an avid runner, now he requires assistance to walk.

Ganeshananda’s career as a Maryland state trooper was over, he told the jury. He struggled hard in rehab to recover and tried to accept his place in the world.

After two hours of deliberations, the jury awarded Ganeshananda $105,541,440 for his pain and suffering. However, the court was forced to reduce it to the state’s legal cap of $815,000, the Post reported. The jury also awarded an additional $1.25 million to cover medical expenses.