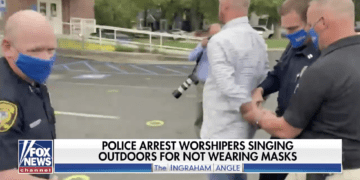 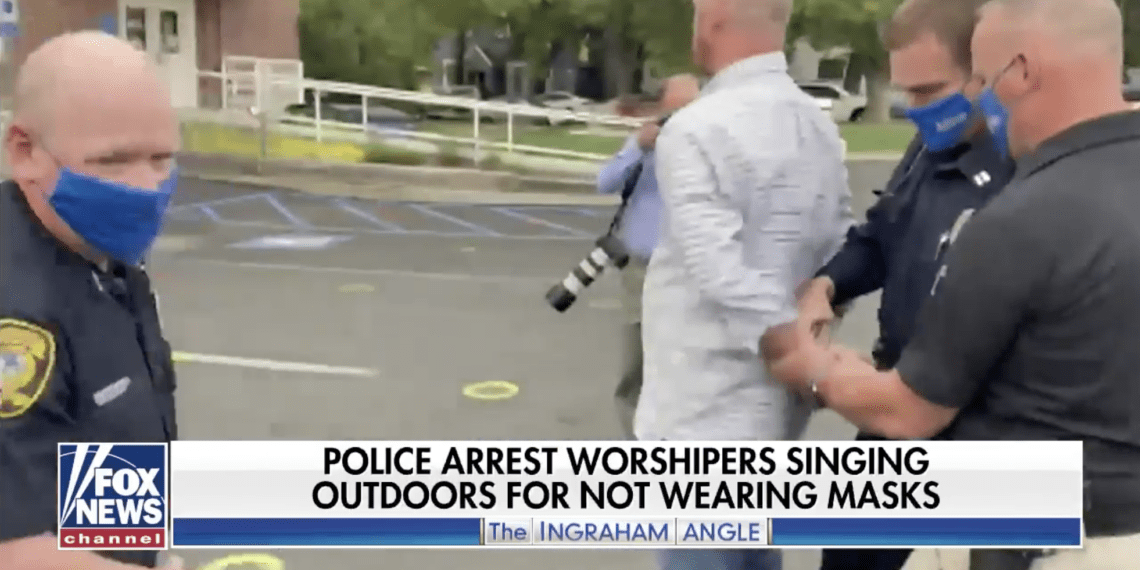 Gabriel Rench is taken into custody after allegedly violating the local coronavirus order.

MOSCOW, Idaho — A man who was arrested for singing maskless at an outdoor worship service in Moscow, Idaho called the incident “unbelievable” when he spoke out on “The Ingraham Angle” Thursday night.

Gabriel Rench, a Latah County commission candidate, was one of three people arrested Wednesday at a “psalm sing” attended by some 150 people in the Moscow City Hall parking lot. The charge: violating a coronavirus order, according to the local news.

“We just started singing the songs and they come up to me and my mom first, and then the guy standing next to me was my friend and I put my arm around him and said, this is my friend, and that’s why they proceeded to arrest me,” he explained.

According to the local resolution, anyone who violates the order is subject to a misdemeanor charge, which carries a maximum punishment of six months in jail and a $1,000 fine, the Moscow-Pullman Daily News reported.

Host Laura Ingraham asked if it was Moscow, Russia or Moscow, Idaho as “protesters are given free rein over city and suburban streets. I don’t even recognize this country,” she said.

Rench, who pointed out his county has not had a single coronavirus death or hospitalization with 392 confirmed cases, called the COVID-19 resolution –­ that went into effect in July and was extended to Jan. 5 last week –­ “petty” and “tyrannical.”

Rench also claimed the mayor attended a religious ceremony on Sept. 5 and did not wear a mask or practice social distance, and also attended a private party of about 50 people three days before with no masks or social distancing.

“Tyranny is stupid and tyranny requires force, so what happens is, once you kind of put your foot in it, your pride and arrogance is starting to drive the rest of the edict,” he said. “So now when we test that tyranny, when we come up and test that tyranny, it pushes them to actually bring force to the issue and that’s why they arrested me. The cops did not want to arrest me.”

Meanwhile, the Idaho arrest came as a woman at a grade-school football game in Logan, Ohio, was reportedly tased and arrested Wednesday by police for not wearing a face mask in the stands.

“It’s unbelievable, the juxtaposition of rioters being able to go out to the street. Maybe if I had a gun or a Molotov cocktail, I would’ve been fine,” Rench said.