Stephanie Anne Isaacson, 14, was sexually assaulted and strangled on her way to school in 1989 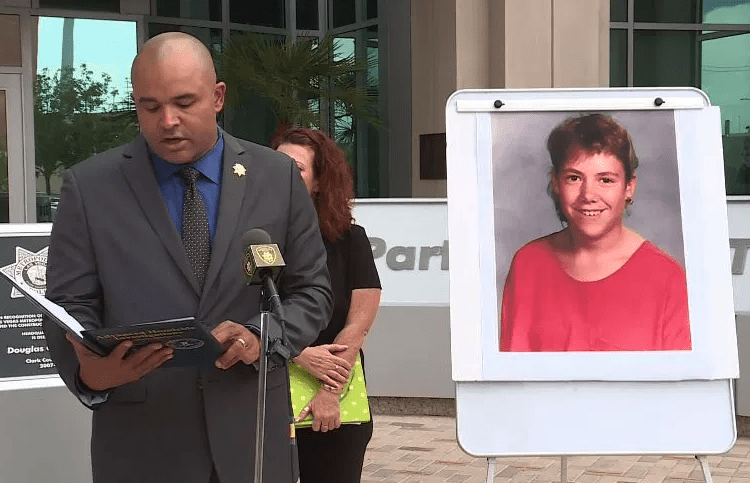 LAS VEGAS — Stephanie Anne Isaacson was 14-years-old when she was murdered in 1989. Police have not solved the crime until now. Las Vegas Metropolitan Police Department announced Wednesday they have identified the teen’s killer.

“We have identified multiple persons of interest over the last decades,” said LVMPD Lt. Ray Spencer. “It was not until July of 2021 that we were able to identify a suspect.”

According to the police agency, Isaacson, an Eldorado High School student at the time of her death, was attacked as she walked to school around 6:30 a.m. on June 1, 1989. No one knew she was missing until she didn’t return home hours later. Her father called police after speaking to friends who said the teen had not been seen at school all day, 8NewsNow reported.

Isaacson’s body was found in a vacant lot about one-third of a mile from her high school. It was on a route she normally walked. Investigation revealed the girl had been sexually assaulted and strangled.

Investigators had crime scene DNA tested twice — 1998 and 2007 — but no matches were found in CODIS, the Combined DNA Index System.

However, like so many recent high profile cases that have been solved, it was genetic genealogy testing that provided answers in this case. In Nov. 2020, a DNA lab offered to use the new technology to help solve a cold case for LVMPD. The funding to pay for the testing came from an anonymous donor. The last of the DNA from the Isaacson case was submitted and the results were revealing.

“In January 2021, the forensic lab in conjunction with our cold case homicide team submitted the remaining evidence that we had, which was very little DNA left, the equivalent of 15 cells was submitted for this testing,” said Kimberly Murga, director of Metro Laboratory Services.

According to police, the murder suspect was identified as Darren R. Marchand. He had been arrested prior to Isaacson’s death in connection with the 1986 murder of a woman, but the case lacked evidence and was dismissed.

Although police have now solved Isaacon’s murder, there will not be an arrest. Marchand committed suicide in 1995 prior to his 30th birthday, 8NewsNow reported.

Spencer says the attack on Isaacson was random. He read a statement from Isaacson’s mother.

“I’m glad they found who murdered my daughter. I never believed the case would be solved. It’s good to have some closure but there is no justice for Stephanie at all. We will never have complete closure because nothing will ever bring my daughter back to us.”

Issacson was born on Aug. 12. If she were alive today she’d be turning 47 in a few weeks.