The strong-armed robbery occurred outside police headquarters earlier this month 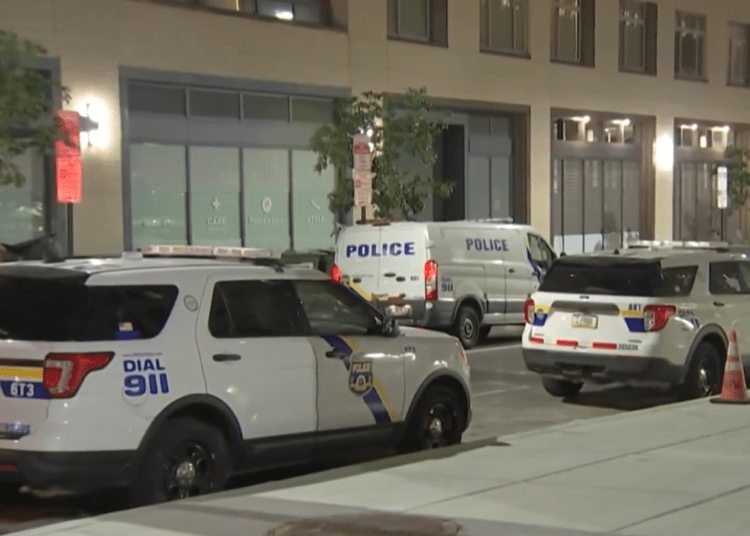 A Philadelphia Police dispatcher was the victim of a strong-armed robbery outside of police headquarters earlier this month. (Screenshot NBC Philadelphia)

PHILADELPHIA – A strong-armed robbery suspect was arrested and charged after he victimized a dispatcher outside of Philadelphia Police headquarters earlier this month, the District Attorney Office’s announced on Saturday.

Lonnie Watlington, 40, was identified as the suspect. He has been charged with aggravated assault, robbery, theft and related offenses, the DA’s office announced, according to CBS Philadelphia.

On the morning of Sept. 15, Watlington ran up behind a 25-year-old police dispatcher and forcefully grabbed her purse, pulling the woman to the ground. As she tried to clutch her property and prevent the thief from making off with it, he pulled her for 10 to 15 feet before taking possession of the purse and fleeing, according to authorities.

The woman sustained injuries, which required medical treatment at the hospital following the crime.

Later in the day of the strong-armed robbery, police said an officer encountered a man panhandling at a convenient store. After purchasing food for the individual, police reviewed a patrol alert and realized the man might’ve been responsible for the robbery outside police headquarters, CBS reported.

As a result, detectives reviewed surveillance video, which contained footage of the panhandling man wearing the same clothing as the one involved in the robbery, police said. After the connection was made, an updated patrol alert was distributed.

On Sept. 21, officers spotted Watlington in the 300 block of North Columbus Boulevard where he was arrested without incident, according to authorities.

PHILADELPHIA – A Philadelphia police dispatcher was the victim of a violent robbery Thursday morning immediately outside police headquarters, officials confirmed.

A suspect “ran up to her from behind and grabbed her purse knocking her to the ground,” the Philadelphia Police Department said in its News and Alerts Blotter. “The suspect then dragged the complainant on the sidewalk and eventually into the street until he was able to take the purse.”

The 25-year-old victim was brazenly attacked about 5:41 a.m. on Callowhill Street. The suspect fled south on 15th Street, police said. They are seeking the public’s help to identify the perpetrator.

“The victim was transported to Einstein Hospital for injuries sustained from this incident,” law enforcement authorities revealed.

Gordon Zimmett, the state employees union president, said, “Her shift starts at six. She was a few steps, literally a few steps from the door. … The worst thing you can have is people thinking police headquarters isn’t safe.”

Zimmett confirmed the dispatcher is recovering after being hospitalized, NBC Philadelphia reported.

According to police, the suspect is described as a Black male, 6’0″ tall, thin build, dark skin, balding, wearing a dark hooded sweatshirt with a “Puma” logo on the front blue jogger pants with light stripes on the side, black sneakers and carrying a black “Nike Air” backpack.