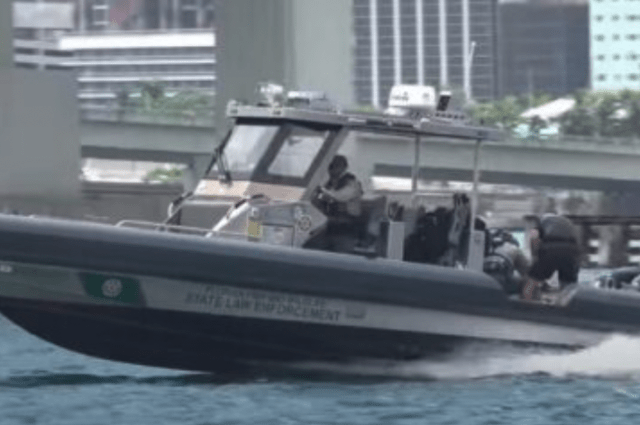 While there are police units specifically assigned to water safety, every officer is a general-purpose emergency responder and may find themselves saving lives at risk from drowning.

A special force of Metropolitan Las Vegas police rescue officers deployed to save a couple being washed away in flood waters while trapped in their van. Their police helicopter took off to search for the couple in distress. Located at about 3 a.m. the van’s occupants were plucked from the vehicle by an officer hoisted from the hovering Airbus H135 which was navigating wind, rain, and utility lines. The older couple had pulled to the side of the road earlier to rest and were overcome by unexpected flooding due to heavy rainfall. Metro search and rescue engages in over 100 rescues every year.

Swift water from torrential rains in California surprised a woman and her two children on September 12th when a flash flood turned their street into a raging river. San Bernardino Police officers were responding to an unrelated call when they arrived to find the family in distress and waded into the torrent to pull everyone to safety. “Our officers do not encounter swift-water floods often, however it doesn’t stop them from jumping into action and saving lives,” San Bernardino’s Police Chief Darren Goodman wrote on Twitter.

A July 30 Twitter announcement from the Apache Junction Police stated “On July 28, 2022, the Apache Junction Police Department responded to 24 different calls for service related to flooding.” A woman stuck in her car in flood waters was rescued by an APJPD officer with the assistance of others at the scene. The woman’s dog that had been in the vehicle could not be located.

A similar scene occurred in Alabama during heavy June rains that flooded streets and stranded motorists. Gasden, AL police officer Braxton Keener responded to a distress call from trapped motorists and assisted them to safety.

In June a Walla Walla, Washington police officer was able to lasso a cat from a fast-moving flooded waterway, saving it from the species’ noted disdain for immersion. In July the Kentucky State Police in coordination with the Kentucky Division of Wildlife performed a dozen searches and three rescues during flooding near the city of Jackson. St. Louis County police had to break a car window to reach a man trapped in flooding in the city of St. Charles in a July 26th rescue.

In August, a man was rescued when he suffered a medical emergency while driving and sped into a New York pond, sinking in 15 feet of water. New York State Police, Trooper Rush came on the scene and literally dove into action to pull the man to safety.

Unusual monsoon-type rains have inundated urban areas and rural waterways with unexpected flooding. Those areas where canals and lakes are part of the first responder landscape find water rescues part of their routine. Other areas, like many of those noted here, are likely to find uniformed police officers the first on the scene. While officers are trained in basic water rescue, implements are sometimes hastily obtained from whatever might be available. Spare tires as flotation devices, tow ropes and straps for reaching victims, and batons for forcing open windows replace the tools available for a full-time water rescue unit.

Getting into the water is especially hazardous for officers who are already carrying over 30 pounds of gear. Boots are not ideal for swimming and ballistics vests are not flotation devices. Whether to take time setting aside a few thousand dollars of taxpayer-funded equipment attached to their duty uniform that might be ruined by filthy floodwaters or stolen by opportunistic bystanders is a snap decision to be made. Unless the rescue is in a pristine mountain stream, rescuers may also face dangerous floating debris, frightened animals both aquatic and normally land-based, and chemical and biological hazards unleashed from their usual places.

Whether it’s performing CPR on a child submerged in a swimming pool, balancing on a slippery shore to toss a line, or diving to a sinking vehicle, police officers find a way to rescue when duty calls.

Chief Joel F. Shults, Ed.D  is a retired police chief. He is an award winning writer, college professor, trainer, and first responder chaplain. He is the author of several law enforcement related books and articles. Shults currently serves as a municipal judge and a coroner’s investigator in rural southern Colorado.