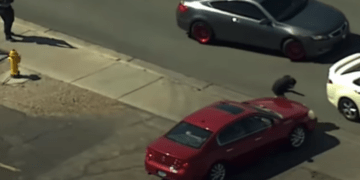 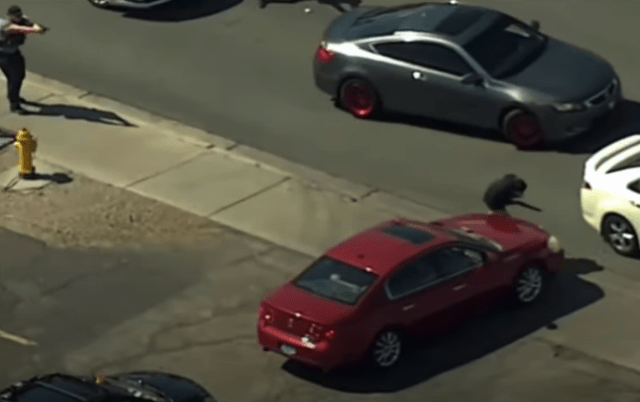 LAS VEGAS – With a shotgun resting on his lap, the 24-year-old criminal sped recklessly through the Las Vegas Valley with Metro Police on his tail.

Officer Johnathan Tomaino, 27, and Officer Alex Kempf, 27, both of whom were in plainclothes, apparently startled Rosa, who subsequently turned and pointed the shotgun at them.

As a result, Rosa was fatally wounded in a barrage of 15 bullets, 11 fired by Tomaino and the rest by Kempf, Clark County Assistant Sheriff Brett Zimmerman said Friday. Rosa, who died at Sunrise Hospital and Medical Center, didn’t get a shot off, according to the Sun report. (Scroll down to watch video.)

The chain of events began when a Metro officer in a marked patrol unit spotted a speeding Acura on Decatur Boulevard and U.S. 95, Zimmerman said. A license plate check determined it belonged to another vehicle, and the Acura later came back stolen.

As a result, the officer tried to initiate a detention of Rosa, but he took off, said Zimmerman, noting that Metro policy dictates that officers can only pursue if the motorist is in the middle of a felony offense or an imminent danger to the public.

At that point, he was neither (the vehicle wasn’t confirmed stolen until later, most likely when the VIN was checked after the shooting), so Metro dispatched a helicopter instead and employed the “bubble tactic,” in which officers will establish a mobile perimeter, guided by the helicopter while following traffic laws, Zimmerman said.

Nevertheless, Rosa tried to shake the invisible tail, speeding upwards of 100 mph on the freeway, at one point accelerating to 120 mph, Zimmerman said. On surface streets, he accelerated to 80 mph while running stop signs and further endangering the public.

At one point, Rosa stopped and dropped off two female passengers. They were quickly detained by officers. During the detention, officers learned that Rosa was armed with a shotgun, which he had in his lap.

Metro radio traffic from the police helicopter indicates a ground unit, possibly a supervisor, was concerned about engaging the armed suspect with marked units on the bubble perimeter.

Eventually, Rosa pulled up to the Siegel Suites on 455 Twain Ave., impeding traffic. A red car pulling out of the complex was blocked by Rosa, who pointed the shotgun at its driver in an apparent attempt to carjack him.

Plainclothes officers in unmarked cars who were tailing him, jumped from their vehicles with weapons drawn while yelling commands toward the armed suspect. Rosa turned around and was met with volleys of fire.

Consequently, he stumbled and dropped to the ground.

Rosa, a felon, had a history of arrests for a stolen vehicle, carrying a concealed weapon, theft and obstructing police, Zimmerman said. He was wanted on a parole warrant out of Utah, according to the Las Vegas Sun.

The officers involved in the OIS were placed on paid administrative leave while the investigation continued, per normal protocol.

As evidence that police work has its foible moments, an unidentified officer was treated after he received an accidental bite from a police K9 when they were securing Rosa.