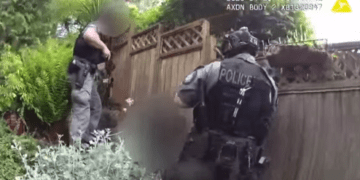 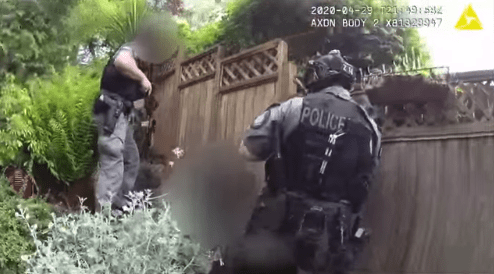 The chain of events began as a domestic violence call Wednesday afternoon — a cause of concern that Seattle Police Chief Carmen Best is raising the alarm regarding recent spikes in those calls during Governor Jay Inslee’s stay at home order.

The footage shows tactical officers rush in to stop Shaun Lee Fuhr, 24. The police department said the man had been beating his girlfriend for hours, then took off with their baby daughter, KOMO reported.

The child was still in the suspect’s arms when one of the officers fired his tactical weaon in an alley near 38th Avenue and South Dakota Street. Although the footage appears to show the man fleeing, Chief Best said the child’s safety was the priority.

“The officers engaged him,” Best said. “They were very concerned about the welfare of the baby.”

Furthermore, the baby’s mother was terrified the girl would be hurt because her boyfriend had a gun and had already fired at her. She sounded hysterical as she called 911 for help, which police also made public, reported KOMO.

“My baby’s daddy has a gun. He’s in the park. He shot in the park. He has my baby,” the mother can be heard saying .”I want my daughter. Please. She’s only 1. Please I’m scared for her.”

After neutralizing the man’s ability to escape with the child, the body camera footage shows officers scooping up the baby. The little girl was not hurt.

Stryder Wegener, who witnessed the police activity, said it was emotional to see the compassion officers showered on the child.

“Literally the baby was brought out, handed to one officer, and they were just patting her on the butt, and shaking her, like I said, the way a father would do,” Wegener said.

Chief Best refused to say much about the shooting investigation itself, but made it clear she is particularly concerned that domestic violence calls are up 25 percent since the beginning of March, around the time the stay at home order took effect.

“We have resources available for victims,” Best said. “We want people to reach out. We want them to call 911.”