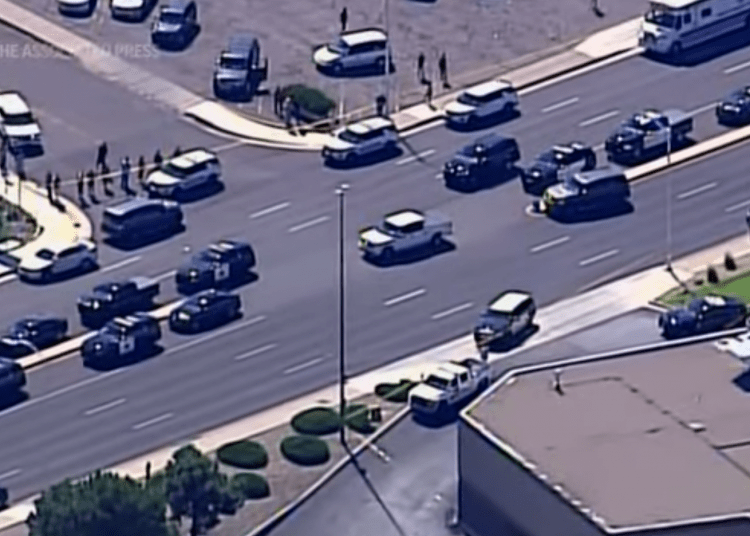 ALBUQUERQUE, N.M. — A felon from Los Angeles has been charged with opening fire on several Albuquerque police officers, severely wounding one and injuring three others as they were responding to the call of an armed robbery.

The critically injured officer sustained a gunshot wound to the neck, just above his body armor. He remains in critical condition on Friday. Another had a gunshot wound to the forearm, one was spared serious injury by his bulletproof vest after a round impacted his chest, and the other officer was hit in the face by glass fragments as he took cover by a police unit during the gun battle that erupted Thursday morning on the city’s northeast side, KTLA reported.

The suspect has been identified as James Ramirez, 27, of Los Angeles, according to the criminal complaint. He’s charged with several crimes, including three counts of aggravated battery against a police officer, armed robbery, possession of a firearm by a felon and resisting evading or obstructing an officer.

Ramirez was also wounded as officers returned fire. Although his injuries were not specified, he is being treated at an Albuquerque hospital.

According to the court documents, a male victim told police he was robbed by a gunman while walking down the street. He was fleeced of his wallet, shoes, gold necklace and a PlayStation that was in his the backpack by two men. He notified police when he later spotted the suspects, which led to the gun battle.

Ramirez is accused of firing at officers as he and the other suspect fled. The second suspect has not been identified or apprehended, according to KTLA.

Much like other large American cities, Albuquerque is dealing with a record-setting year of deadly violence with mounting frustration among residents and people working in law enforcement. Many individuals are criticizing the state’s no-money bail system, which became law in a 2016 statewide vote, KTLA reported.