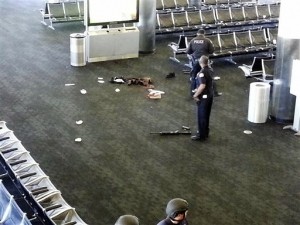 LOS ANGELES (AP) — A dispatcher at Los Angeles International Airport couldn't immediately send police to a shooting last year because the emergency phone system didn't provide a location, according to an investigation that also found broken panic buttons that are supposed to quickly call for help.

A screening supervisor picked up the "red phone" seconds after shots were fired in the sprawling airport's Terminal 3 last Nov. 1, but she fled as the gunman approached with his high-powered rifle. Because no one was on the other end of the line to provide details and no location information was included with the call, the dispatcher was helpless, according to two officials briefed on preliminary findings of a review of the emergency response.

They spoke only on condition of anonymity because the final report won't be released until next month.

One of the officials likened the situation to a 911 call with police not knowing what address to go to. Airport dispatchers knew something was wrong but didn't know where to send help because the system didn't identify the locations of its emergency phones.

An airline contractor working in the terminal called dispatch directly from his cellphone and provided the location. Officers were sent nearly 90 seconds after the shooting started.

The review also found broken panic buttons. Those devices are supposed to automatically call for help and activate a camera giving airport police a view of the area reporting trouble. Two of the dozen or so buttons in Terminal 3 weren't working and several others around the airport were defective.

Though Transportation Security Administration officers told airport officials that an officer hit the panic button at the time of the shooting, there's no evidence — video or electronic — it happened.

Later testing revealed that another terminal's entire system of buttons was down and airport police beefed up patrols until it was fixed, one of the officials said.

Douglas Laird, a former security director for Northwest Airlines who owns an aviation security consulting business, was surprised to learn of the issue with the emergency phone. Most systems he's seen indicate the origin of a call.

If "dispatch doesn't know where the call is coming from, that shows there's a serious flaw, obviously," said Laird, who has conducted security surveys at about 100 airports around the world. He was not involved in the review of the Los Angeles airport shooting.

A spokeswoman for Los Angeles World Airport, the agency that runs LAX, provided a statement but did not address whether the emergency phone system has been updated to automatically provide a location.

"While we won't get into specifics as it relates to security, we are inspecting these systems daily to ensure they are working properly. If they are not, we fix them as quickly as possible," Mary Grady said via an email. "We constantly look for ways to improve or enhance our capabilities in this area."

The phone and panic button problems are the latest issues to emerge from the review of the emergency response to the incident. The Associated Press previously reported that the only two armed officers on duty in Terminal 3 were out of position when the shooting began, and medical help wasn't quickly provided to the TSA officer who was the only fatality.

J. David Cox Sr., national president of the American Federation of Government Employees representing 45,000 TSA employees, said Thursday that TSA officers count on security equipment to work in an emergency and reports of such "widespread equipment defects and security gaps at LAX are deeply troubling."

He added: "Preventable issues like this cannot and must not be tolerated."

"I was shocked to hear that they have these systems in place, and they're not functioning," Rodriguez said. "Why is it, and who's responsible for it? It shouldn't take these emergencies to find these problems are occurring."

The attack killed TSA Officer Gerardo Hernandez, the first on-duty fatality in the agency's history, and injured two other TSA officers and a passenger.

Paul Ciancia, 24, who'd moved from Pennsville, N.J., to Los Angeles two years prior, is accused of targeting TSA officers. He has pleaded not guilty to 11 federal charges, including murder of a federal officer.

The broad review of the emergency response included interviews with airport staff, law enforcement and first responders, reviews of camera footage, dispatch logs and 911 calls. While it found that the response was swift, the investigation conducted by airport staff and an outside contractor identified a number of problems. Among them:

— Anyone calling 911 at the airport is routed to the California Highway Patrol or Los Angeles Police Department, not airport police dispatchers.

— The airport has no system allowing for simultaneous emergency announcements throughout the complex.

— Most cameras in the terminal provided fixed and often limited views of areas or weren't located at key spots such as curbs, making it difficult for investigators to learn how and where the gunman arrived at the airport.

Earlier AP reporting revealed that the two armed officers assigned to the area of the shooting weren't in Terminal 3 at the time. Both were on breaks and had yet to notify dispatchers, as required, so neither was in position to call in the shooting.

Once dispatchers put out the call for help 90 seconds later, it took nearly two more minutes before armed officers arrived. Ciancia was shot and taken into custody near gate 35, deep inside the terminal, soon afterward.

The AP also found that it took 33 minutes for Hernandez to be wheeled out of the terminal to waiting medical personnel because the area wasn't declared safe to enter. He was pronounced dead at the hospital after surgeons worked on him for an hour. A coroner's news release later said he likely was dead within two to five minutes after being shot multiple times.

In response to the shooting, the Los Angeles Fire Department already has announced it will train more tactical paramedics who can more quickly enter dangerous areas. Los Angeles police are training their officers on how to use combat-style trauma kits.

The review recommends instituting emergency protocol and evacuation training for all airport employees.

"We realize in incidents like this, how quick you are or how fast you are at responding to incidents is generally going to be the difference between how many people get hurt or don't get hurt," Airport Police Chief Patrick Gannon said in a recent interview. He said the airport in its review had looked at ways to speed up notification from TSA, dispatch and also within the airport itself.

Since the shooting, Gannon said airport staff worked to ensure that all airport employees have the airport police dispatch number in their cellphones.

Tami Abdollah can be reached at http://www.twitter.com/latams