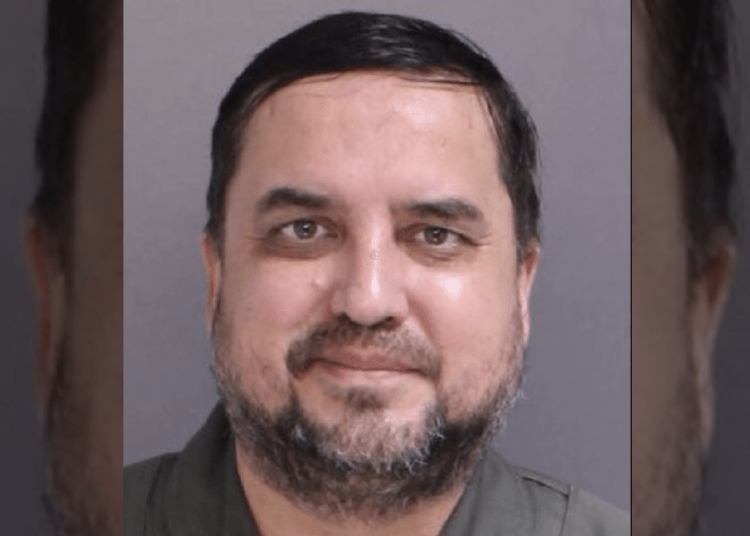 Nikolay Lukyanchikov was charged with aggravated cruelty to animals and discharging a firearm into an occupied structure, among other charges. (Northampton Township Police Department)

NORTHAMPTON TOWNSHIP, Pa. — An “incredibly intoxicated” Pennsylvania man shot his dog and grilled the animal in a fire pit in his front yard, authorities said.

Nikolay Lukyanchikov, 48, was arrested Friday outside his Northampton Township home, where officers found a burning fire pit and a couch in flames in the front yard, police said.

“Once the fire was under control, patrol observed an unknown animal badly burned and charred on top of a small metal charcoal grill,” Northampton Township police said in a statement. “It was later learned the animal was Lukyanchikov’s dog.”

Lukyanchikov was “incredibly intoxicated” at the time and unable to speak, according to an affidavit of probable cause for his arrest obtained by The Philadelphia Inquirer.

Lukyanchikov was also dousing $100 bills with lighter fluid and burning them in the metal fire pit — which was topped with a barbecue grate where his canine was cooked, according to the affidavit.

The dog apparently had been shot in the eye prior to being badly burned, authorities said.

Lukyanchikov’s roommate reportedly told investigating officers he confessed to shooting his dog with a 9mm handgun before hiding the animal outside. Police found bullet holes in a bedroom, as well as in a hallway, the affidavit states.

A handgun believed to be the weapon used to kill the pet was also recovered from the home, the Inquirer reported.

Lukyanchikov was charged with aggravated cruelty to animals, discharging a firearm into an occupied structure, reckless endangerment and possessing instruments of a crime, police said.

Lukyanchikov, whose bail was set at $1 million, remained in custody Monday. Prosecutors sought the amount due to the felony animal cruelty charge and claimed he was a danger to the community, the Inquirer reported.

In spring 2017, Lukyanchikov shared a photo on Facebook of a German shepherd and a Siamese cat that he called “our formidable security forces.” It’s unclear whether the dog pictured was the animal killed in last week’s incident, the New York Post reported.

Lukyanchikov’s roommate reportedly told police he shot the dog before hiding the animal outside. (Facebook)

Lukyanchikov also shared a stock image on Facebook of five dogs draped in lights in front of a Christmas tree in December 2017 while wishing friends and family all the best in 2018 — which he noted was a “Year of the Dogs” in the Chinese zodiac.

“In the Year of the Dogs, I wish you success, Health and fun without limits!” Lukyanchikov wrote in Russian, according to a translation. “May there be a lot of joy and laughter [and] you are surrounded by your loved ones!”