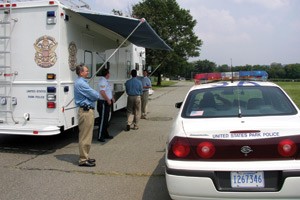 In 1998, an eight-hour closure on the Woodrow Wilson Bridge in Washington, D.C., had a lot of first responders talking. Unfortunately, not to each other.

A jumper on the bridge jammed the National Capital Beltway, a thoroughfare for Virginia, Maryland and Washington, in previously unimaginable ways. Traffic was a mess, and where radios and dispatch centers weren t compatible, responders could not relay information in a timely manner. Responders turned to their personal cell phones.

That incident got criminal justice, public safety and transportation heads from the four jurisdictions that control the bridge talking, and ultimately CapWIN, the Capital Wireless Information Net, was born. We first put together the program thinking, The next Sept. 11 we ll have a common platform to communicate, says John Binks, training/multimedia manager for CapWIN. What we realize is we don t need another Sept. 11.

With more than 83 agencies and nearly 4,000 individual users to date, CapWIN has first responders speaking loud and clear.

Whether instant messaging a single person or texting an entire group with confidential details, CapWIN s abilities provide for all circumstances. Approved by the Department of Homeland Security and agencies such as the FBI, CIA and Pentagon Force Protection Agency, the system is many tools in one. It provides four unique applications: incident coordination, mission-critical data access, interoperable data communication tools and technology and support.

Incident coordination is made simple through CapWIN, with communication capabilities, integration of video, image and document media, as well as automated GIS mapping. Upon the creation of an incident, whether pre-planned or unforeseen, critical data is disseminated instantly region-wide. Members may be invited to private chat rooms to view certain details others need not know. This is a key tool for all ranks of responders, from the chiefs managing a scene to those out in the field.

Many events managed through CapWIN are pre-planned, such as community functions, sports events or even SWAT raids. Participants receive pertinent data prior to responding or while on scene, aiding in safety, efficiency, time and personnel management, not to mention a positive outcome. Washington, D.C., serves as host to many of the largest staged events in the nation. When the nation s capital coordinates its fireworks, it s a big deal, Binks says. It s the National Fourth of July, with the National Symphony Orchestra playing. Tens of thousands of people congregate on the National Mall. Not to mention, the National Marine Corps Marathon, World War II Memorial Dedication, etc. These national functions can involve many agencies, of many levels, with many personnel mobilized. The ability to communicate between all levels on a dedicated, secure network is significant.

Individual access to the vast amount of data available through CapWIN fits a user s specific role in their department. For example, a firefighter would not require access to NCIC on day-to-day duties. However, there may be an arson investigator at that same department, explains Binks. This one individual would be granted access into NCIC by the FBI if he s authorized.

CapWIN also functions as a region-wide public safety telephone directory of sorts, another means of uniting the responder community. Any user can search and locate other users, whether by region, title, specialty, etc. Let s say I was a bomb technician, and you wanted to message to another bomb tech, explains Binks. You could look in CapWIN and search, say, by Prince George s County for a bomb tech, and my name would come up.

This everyday connectivity, Binks says, is what CapWIN has evolved into. The program was first designed to increase preparedness for the next Sept. 11. Today, it s ready for that and many routine tasks, linking first responders each and every day.

Funding for CapWIN began in 1999 with a grant from the U.S. Department of Transportation and other sources. Additional funding was obtained in 2000 and 2001. Congress earmarked $20 million for a full-functioning, area-wide system.

Binks notes this did not come together devoid of a few challenges along the way. One of the big things we do is play well with everyone, he says. We don t want to have this attitude that it s CapWIN or the highway.

Familiar at first was the echo of agencies resonating, Oh, you can t share that data with another state. Many meetings later, representatives from all factions agreed upon future measures, with partnership papers signed and approved by attorneys. Meeting the many governmental criterion served as the next hurdle.

CapWIN is built with standards in mind. One staff member dedicates his time to ensuring any technological implementation meets all necessary standards, at all levels, including local, state and federal. These include (but are not limited to) the National Information Exchange Model (NIEM), the Global Justice XML Data Model (GJXDM), the IEEE 1512 series pertaining to the Transportation Incident Management Sets and more.

The result? CapWIN seamlessly links first responders of all jurisdictions and disciplines, regardless of radio or computer style. Each user needs only a desktop computer, laptop computer or PDA, a standard Web browser and CapWIN CD containing the CapWIN software, WECM Virtual Private Network (VPN) and Java Runtime software. An agency can use its existing hardware if it s compatible. CapWIN staff provide all necessary software for installation.

Access is available through numerous commercial wireless providers as well as state wireless networks. The connection can be hard-wired from an agency to CapWIN s Network Operations Center (NOC) Greenbelt, Md., or wireless through a connection such as EvDO, 1xRTT, 802.11x, CDMA, GSM and 800 MHz, among others.

Involvement in CapWIN includes a training program that not only educates about the services the program offers, but in most cases, contributes to a responder s required annual training credits. Fifteen classes comprise this accredited educational service, which Binks oversees.

Some of the most popular courses are not even focused on CapWIN, but a general overview of computers for public safety, and the ins and outs of PDAs. In the PDA class, we spend a lot of time on the CapWIN portion of the device, but also much on understanding what PDAs are, says Binks. A lot of people are used to a computer. They don t know that with a PDA if they allow the battery to 100-percent die, the drive is reformatted and they ve lost all that data. The Introduction to Computers for Public Safety course is for those users who look at the floor when you say mouse, notes Binks with a laugh. CapWIN staff also provide VCIN training.

As part of the University of Maryland s Center for Advanced Transportation Technology (CATT), CapWIN s significance to the public safety community became a reality early in the 21st century. CATT, on the College Park UMD Campus, still helps oversee CapWIN, whose home base is Greenbelt. The CapWIN organization is governed by a board of directors comprised of state and federal representatives from Virginia, Maryland and the District of Columbia. The board meets quarterly, discussing improvements, challenges and successes of the CapWIN project.

Until recently, first responders received CapWIN free of charge. The board of directors established a subscription fee, and the program s goal is to become self-sustaining by 2010. Agencies are asked to incorporate CapWIN into their annual budgets, for which the user fees are pretty small, notes Binks.

Incident management thrives at a new level in this region, and many people around town are noticing the difference. From top federal agencies monitoring terrorist activity to local police stopping speeders, CapWIN provides a data sharing and communication vehicle to benefit all.

In a recent Maryland State Police (MSP) SWAT raid, access to MVA photographs proved an invaluable tool in catching a crook. One suspect escaped out the back and the team missed him, relates Binks. In the SWAT van, a computer was linked directly to CapWIN. The team ran a CapWIN MILES query that now includes the most recent MVA photos. It sent the photograph from the van to all neighboring police agencies, and issued a BOLO in CapWIN to watch for the guy. The local police were told not only who he was, but saw what he looked like, in a matter of minutes.

Further south, the annual National BBQ Festival in Virginia finds the support of CapWIN essential to a stress-free event. Binks, who has been there himself, raves about the food, but also emphasizes the advantage a single communication tool contributes to such an affair. If you re the police department there, which has hired many extra officers from other agencies for assistance, a common platform is a nice tool for communicating.

The MSP is a large user of CapWIN. On any given day, there are probably 200 300 MSP officers online, says Binks. In 2004, the agency came on board as part of a three-year, $7.5 million initiative automating its squad cars. The agency s 1,000 new laptops are installed in the cars with CapWIN capabilities. MSP uses CapWIN for everything from taking roll at a shift s start to backup communications capabilities when radio is down.

One MSP trooper averages 300 400 license plate queries per day. He sits all day at stop lights running tags, notes Binks. That s something he never would be able to call into a teletype operator. He d get fired the first day, he jokes. To be able to do that out in the field saves hours and lives.

The system is designed to function with 10,000 concurrent users. There s still a ways to go to reach that number, but Binks sees the potential for it to happen one day. In the tri-area it serves, he says there are 1,500 agencies; Washington D.C. alone boasts more than 300 police departments. Then, of course, there are the National Zoo Police, U.S. Supreme Court Police Department, National Cathedral Police, etc. he says with a laugh, noting these are agencies most people do not realize exist.

The other groups hopping on board with CapWIN most recently are transit agencies, such as Washington Metropolitan Area Transit Authority, Potomac and Rappahannock Transportation Commission. In 2006, CapWIN partnered with the Regional Integrated Transportation Information System (RITIS) project, integrating it into its data services. Users now have access to regional transportation data, including details about transportation-related incidents and automated map generation. Officials can join RITIS incidents created in CapWIN and offer updates from the field.

Currently CapWIN is not available to state and local agencies outside Virginia, Maryland and the District of Columbia. It is, however, available for use by federal agencies anywhere in the country. And one of the project s stated goals is to provide a model and documentation so the project can be replicated in other areas of the United States and other countries.

The next step in the evolution of CapWIN is for an agency to access data over the network using its own CAD system instead of the CapWIN Mobile Data Solution. This evolution has already begun in Maryland, Binks says. Baltimore City Police Department officers receive driver-license photos from CapWIN when they run queries using a residential CAD system provided by a vendor. This capability makes it possible for the region to achieve universal interoperability across agency, discipline and jurisdictional boundaries.

With new buttons and features, GPS capabilities, virtual voice systems and more on the horizon, CapWIN is moving forward at top speed. Communications has never been more advanced, and responders find themselves prepared to talk and share data during any incident when needed, be it a bridge closure, SWAT raid or fireworks display.

For more information on the system, visit www.capwin.org.