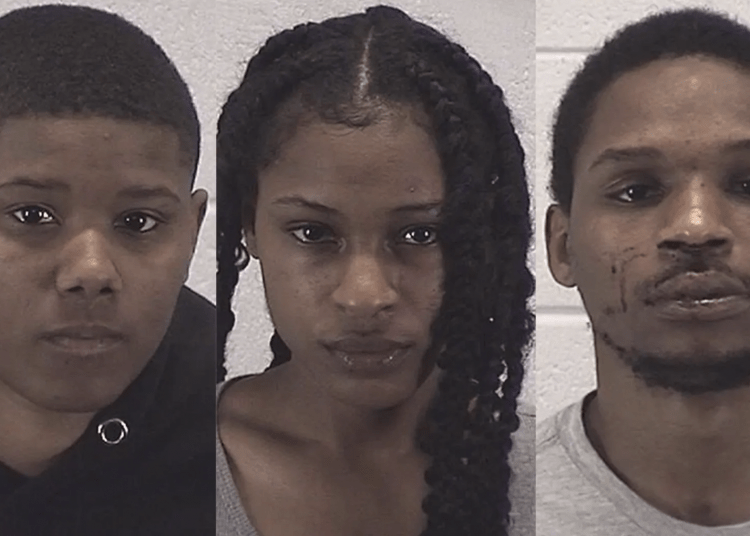 AURORA, Ill. — A trio of suspects in Aurora, Illinois are facing felony charges after reportedly battering and strangling a police officer who pulled them over for a traffic violation.

Paul Sherrod, 28, Jennifer Taylor, 24, and Sheba Taylor, 26, have each been charged with aggravated battery, resisting or obstructing a police officer causing injury and aggravated assault of a peace officer, according to the Aurora Police Department.

Sherrod was driving a vehicle about 10:30 p.m. Monday when he was stopped by an unnamed male officer for rolling through a stop sign, NBC Chicago reported. Passengers in the vehicle were identified as Jennifer and Sheba Taylor.

When the officer initiated the car stop, the vehicle pulled into a driveway in the 600 block of North Elmwood Drive. “The driver began yelling obscenities out the window,” according to a news release from the Aurora Police Department.

A female exited from the rear of the vehicle. (It’s not clear if this was Jennifer or Sheba). The officer “ordered her back into the car several times before informing her that she was under arrest for obstructing,” police said. Before she was taken into custody, Sherrod, continuing to yell obscenities, exited the vehicle, approached the officer and told the officer he would fight him if he touched the passenger.

“The officer informed the driver that he was also under arrest for obstructing. At that moment, the driver took off running, and the officer gave chase. The two passengers also followed the officer yelling obscenities. The female rear passenger approached the officer as they ran, the officer turned around and grabbed her arm to take her into custody, but she slipped out of his grip,” police said in the press statement.

Both women “then began striking the officer with closed fists and kicking his body and head,” police said. “The officer heard a male’s voice and then was struck repeatedly in the head from several angles.” The female passenger “placed her forearm around the officer’s neck and applied significant force to his windpipe, causing him to lose the ability to breathe,” according to the department.

Additional officers arrived at the location and took the three suspects into custody. Aurora Fire Department paramedics responded to the scene and transported the officer to an area hospital for treatment, NBC Chicago reported.

“Our Aurora police officers are entrusted with keeping our community safe from harm. I am at a loss of words when an officer is physically attacked from something that would have been a simple traffic ticket,” Aurora Police Chief Kristen Ziman said in a statement. “We will not allow our city to become a place where criminals feel emboldened, and lawlessness ensues.”

“This type of lawlessness and violence against our police officers cannot and will not be tolerated,” Mayor Irvin said in his own statement. “This was an act of malice and cowardice and I will absolutely seek that the perpetrators are prosecuted to the fullest extent of the law. Let’s keep this officer in our prayers as the officer makes a full and complete recovery.”

They each had a bond hearing Tuesday morning. Bail for both of the Taylors was set at $50,000. Sherrod’s bail was set at $75,000. Each defendant has a separate court date scheduled in July.