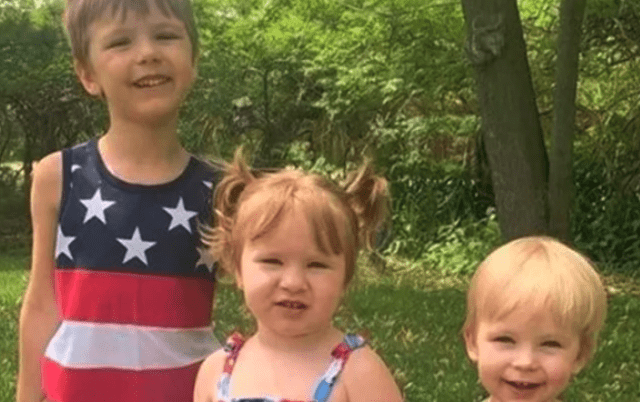 ROUND LAKE BEACH, Ill. – Police in Illinois announced that a man was charged Tuesday for the murders of his three young children after they were found dead in a Round Lake Beach home the day before.

The children were found dead in Karels’s Round Lake Beach home on Monday after their mother asked law enforcement authorities to conduct a welfare check.

The children’s mother and Karels, 35, are estranged, but share custody of the children.

Karels was not home when the bodies were discovered. As a result, police disseminated information to officers regarding Karels’s vehicle, which was located on Interstate 57 near 115th Street.

When officers tried to make a stop, Karels fled. A vehicle pursuit lasted 17 minutes and spanned across multiple highways, police said, according to FOX 32.

Jason Karels, 35, is charged with three counts of murder in the drowning deaths of his children. (Lake County Jail)

The chase terminated when the Karels drove off a bridge and crashed into a wooded area near Interstate 80 at Water Street in Joliet, police said.

The wanted suspect was taken to the hospital where he remained overnight. Police said he admitting killing the children and said he tried to kill himself afterward, but didn’t succeed.

Officials confirmed there was a lot of blood at the home where the kids bodies were discovered, but it didn’t belong to the children, FOX reported.

Authorities did not disclose how Karels tried to take his life.

“I have an amazing staff here of officers. And what they saw yesterday is something no one should have to see,” Round Lake Beach Police Chief Gilbert Rivera said during a news conference.

Autopsies conducted on the children determined they died from drowning, officials said.

Karels is expected to make a court appearance on Wednesday.