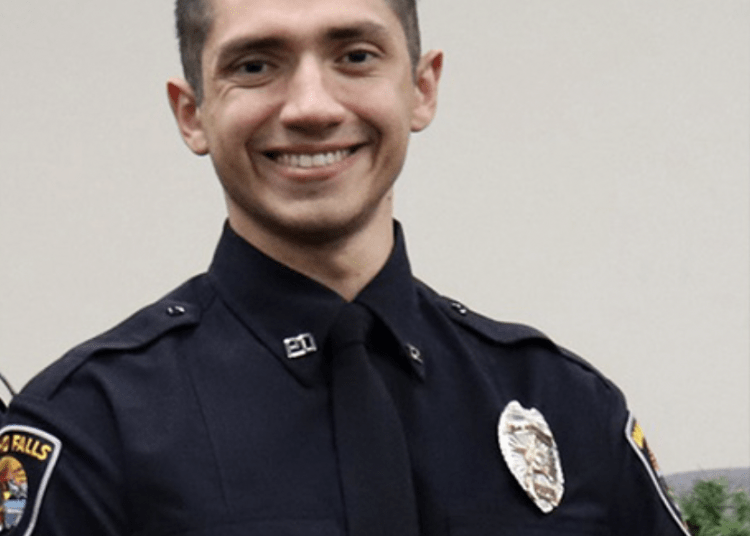 IDAHO FALLS — A grand jury has indicted Idaho Falls Police officer Elias Aurelio Cerdas for a shooting following a man hunt last February. Cerdas, a 26-year-old officer, was indicted Friday for felony involuntary manslaughter. Cerdas faces up to 10 years in prison and or a $10,000 fine if convicted according to East Idaho News.

Specific details of the shooting has not been released but the incident occurred on February 8th after deputies from the Bonneville County Sheriff’s Office pulled over Tanner Shoesmith, 22, for a broken taillight. Shoesmith fled the scene as Idaho Falls Police officers arrived in the area.

A local resident spotted Shoesmith running through a yard and believed he was carrying a gun. With that information and during the search, police discovered that he had several warrants for his arrest and a violent history with law enforcement, including a warrant for felony battery on an officer.

GPS coordinates from Shoesmith’s phone placed him in a backyard of a residence. As police surrounded the home, they heard a man yelling and located an individual with a black shirt carrying a gun. Shoesmith was also reported to be wearing a black shirt.

Officer Cerdas encountered the subject where the shooting occurred.

The subject, Joseph “Joe” Johnson, a father of four, was actually in his own backyard and the actual suspect was later located

“As always, we understand the importance of allowing this to work its way through the appropriate legal processes. We put our trust in the American system of justice and are committed to cooperating fully as this case proceeds. We hope that calm and reason can prevail as the facts come out and are deliberated. Police work is dangerous and difficult, and when situations like this occur it’s important to recognize that lives are impacted on all sides. This is a tragic situation all around and our hearts go out to all involved.”

Law Officer reached out to several use of force and case law experts in regard to this incident and while specific details have yet to come out, the information that is currently public could pose an issue for any conviction.

Case law has longed ruled that law enforcement must be judged based on the information they have at the time along with the totality of circumstances that they are presented with. What is known at this time is that police were chasing a wanted felon they believed had a gun. They went to the exact location where technology led them and encountered a subject wearing similar clothing that also had a gun.

The courts will be looking at what was “reasonable” and a jury will have to decide whether the actions by Officer Cerdas were reasonable based on the information he had at the time and not what prosecutors or investigators found out after the fact.

This incident is truly a tragedy and we will await court proceedings to determine whether it was a crime.

Law Officer will update this story as additional information is obtained.