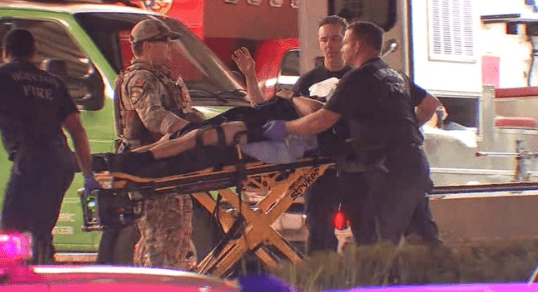 HOUSTON – A Houston police officer was seriously wounded in a gun battle with a crime-spree suspect who wound up dead Thursday night.

The 29-year-old officer, whose name has not been released, was shot three times in a shootout with one of four suspects around 10:30 p.m. in southern Houston, police said.

The deadly encounter began around 10 when the suspects were involved in an armed carjacking of a 2003 Chevy Tahoe, according to Houston Police Chief Art Acevedo.

We have one of our officers who has been shot on the 3900 block of Tristan at Scott. He has been transported to @memorialhermann by @HoustonFire. Please pray for our officer. We also have one suspect down, others in custody and are looking for more. Please stay in hour homes.

Not long afterward, the suspects tried to rob a priest and then beat him when one of their guns jammed and they couldn’t shoot him, Acevedo told reporters.

“A priest. You heard that right,” Acevedo said. “A priest in the parking lot was approached by four black males.”

One of the suspects was found around 10:30 and arrested, Acevedo said. A few minutes later, another was discovered and tried to flee. Officers ran after him, and a gunfight broke out, the chief said.

The suspect was shot and killed by one or more officers, and the injured officer was taken to a nearby hospital where he was in surgery and “not out of the woods yet,” Acevedo told the Houston Chronicle.

WHAT WE KNOW: Houston police chief @ArtAcevedo is asking for prayers for the 29-year-old officer who was shot last night, sharing that the young officer's father has also served in the department for 42 years. https://t.co/xQIn8RBl2C

Another suspect was eventually arrested, but one got away, Acevedo said.

JUST IN: A CHAOTIC & SCARY night for @houstonpolice after an officer was shot 3x in the chest during a violent crime spree in SE #Houston.
This is surveillance video showing moments leading up to that shootout!
The 29 y/o officer is out of surgery, in ICU. #khou11 #htownrush pic.twitter.com/iESOEdIxLc

Michelle Choi reported the officer was out of surgery and in ICU. ABC13 reported the five-year police veteran’s condition is “critical, but guarded.”

Acevedo, who used to be the police chief in Austin, knew the officer when he was in the state’s capital city because the officer graduated from the University of Texas.

“This is close to me. His father is a 42-year veteran of this department, and he talks about the commitment of our men and women, and the history we have of working a great city, for this great mayor and great community and our officers will cross generations, second generations, third generations,” Acevedo said.

The police chief also said the injured officer is currently engaged to another HPD officer.

The violence erupted on the same night that Houston hosted the Democratic presidential debate.