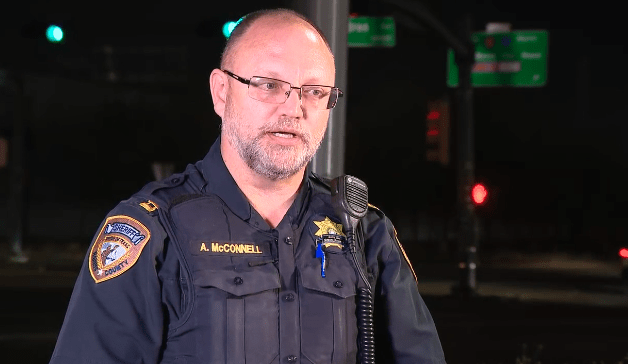 Captain McConnell of the Harris County Sheriff's Office briefs the press after the constable deputy was killed by a suspected DUI driver. (Screenshot FOX 26)

The traffic fatality may have been caused by an impaired driver, Captain McConnell of the Harris County Sheriff’s Office Vehicular Crimes Division said, FOX 26 of Houston reported.

According to McConnell, they were called to assist and take over the crash that occurred on the South Sam Houston Parkway West, near Fondren Road.

The incident began when the agency was advised to be on the look out for a suspected drunk driver.

After receiving the call, the unnamed female constable deputy stopped along the roadside, when the suspected DUI driver she was looking for crashed his large Ford F-550 truck into the deputy’s vehicle and pushed it a significant distance down the highway, McConnell said. The law enforcement vehicle immediately burst into flames, according to the news outlet.

Following the horrific crash, several witnesses prevented the suspect from leaving the scene, according to authorities.

On behalf of @HCSOTexas I send our deepest condolences to the family and loved ones of the fallen Harris County Pct 7 Deputy Constable. Our thoughts are with Constable Walker and all members of her agency. Godspeed.

“My heart is hurting,” McConnell said. “I just ask you that you pray for the family and the friends of this constable.”

“Tonight we have a hero that died,” he added. “Every agency out here has a DWI unit, and we’re fighting people like this to get ’em off the streets.”

There is an ongoing investigation to determine the intoxication level of the driver, FOX reported.

Just a few days ago an off-duty Harris County deputy was shot and killed by suspects while he was grocery shopping with his wife.

Deputy Darren Almendarez engaged in a gun battle with three suspects who were stealing automobile parts from his pickup truck, Law Officer reported.

Harris County Precinct 7 Deputy Constable Jennifer Chavis paid the ultimate sacrifice. She died yesterday in the line of duty, after being struck by a suspected drunk driver. It saddens me to know how her life was senselessly cut short. #HouNews #lesm pic.twitter.com/XcOI4SW4if

The suspect-driver of the Ford F-550 was identified as 36-year-old Adolfo Serrano. He has been charged with Intoxication Manslaughter of a Peace Officer.

Update #4 to crash on tollway: Adolfo Serrano (36) has been charged with Intoxication Manslaughter of a Peace Officer. #HouNews https://t.co/B1R2FkH4Zh

“We are heartbroken to hear about the loss of Harris County Precinct 7 Deputy Constable Jennifer Chavis who was protecting Texans from a drunk driver on the roadway last night,” said Governor Abbott. “As we remember the risks our law enforcement officers take every day to protect our communities, I ask that Texans join the First Lady and me in praying for the family and loved ones of Deputy Chavis, as well as the entire Harris County Constable’s Office.”