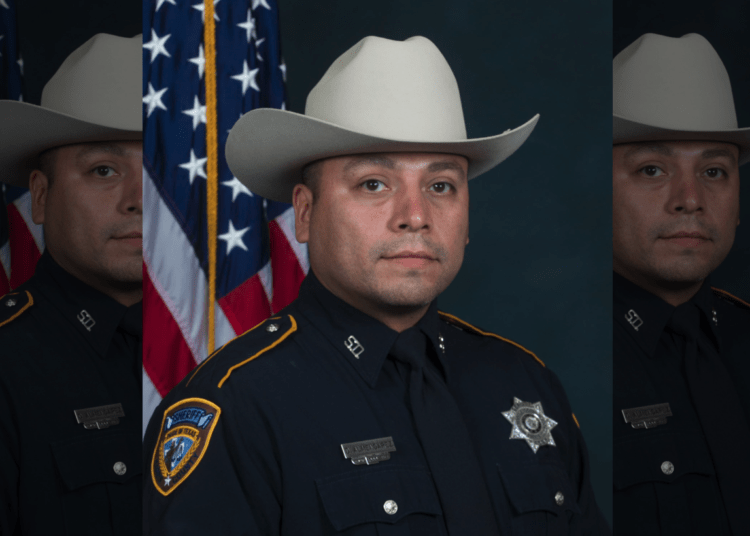 HARRIS COUNTY, Texas – A deputy with the Harris County Sheriff’s Office in Texas was killed following an exchange of gunfire with thieves in a grocery store parking lot Thursday night.

Deputy Darren Almendarez, a 23-year veteran of the department was identified as the law officer who was shot and killed. He was assigned to the auto theft division, but was off-duty at the time of the shooting, FOX 26 Houston reported.

Almendarez, 51, was exiting the grocery store with his wife when he apparently saw some suspects stealing automotive parts from his personal truck. He saw a Nissan Altima backed up to his pickup and two males beneath his vehicle. He cautioned his wife to get to safety and then approached the perpetrators, authorities said.

“Possibly a catalytic converter that was being stolen,” Sheriff Ed Gonzalez said at a news conference. “We’re not sure. Those details are still being investigated. But, he intervened. He intervened to try to stop a crime.”

As Almedarez approached three suspects who were actively involved in the crime, they opened fire, the sheriff’s office says. He was struck multiple times.

HCSO officials said the deputy was able to return fire, striking at least two of the suspects, who then fled in their vehicle.

Almendarez was rushed to HCA Houston Healthcare Northwest, but he did not survive his gunshot wounds, FOX 26 reported.

Update 2 to shooting on 1960: It devastates us to announce our deputy has been pronounced deceased. Please keep his family and our members in your prayers. I will provide an update to media shortly outside HCA Houston NW, corner of Judiiwood & Cali. #HouNews https://t.co/yvSFViGAd1

Two wounded suspects arrived at the same hospital a short time later. HCSO identified them as Joshua Stewart, 23, and Fredarius Clark, 19, according to FOX 26.

Gonzalez said they are in stable condition and both have been charged with capital murder. A third suspect remains outstanding.

The sheriff called the death tragic and referred to crime in the community as “unacceptable.” He also noted that Almendarez is a hero as he was willing to confront people involved in a criminal act.

“And, really a hero, because as all of this was unfolding he had the mindset to make sure he was protecting his wife. He told his wife to run, to get away from danger, as he put himself in harm’s way to protect the rest of the community and to try to stop a crime,” Gonzalez told reporters.

“Deputy Darren Almendarez loved our community and worked hard every single day to make the world a better and safer place,” the Houston Police Officers’ Union wrote on Facebook early Friday. “His sacrifice will never be forgotten and he will always be remembered. Rest in peace, brother.”