Sheriff Frank Leonbruno said the community 'loved it,' but he apologized to the few who found the costumes offensive. 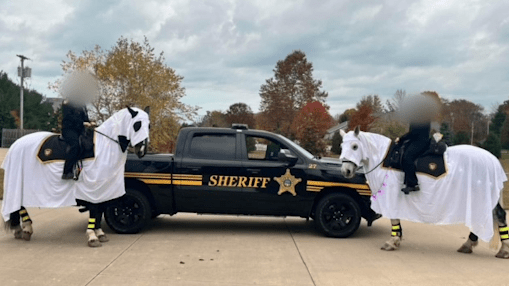 LAKE COUNTY, Ohio – The Mounted Unit of the Lake County Sheriff’s Office in Ohio believed they were demonstrating community spirit by dressing their horses up as ghosts while they patrolled the neighborhoods on Halloween. Although many people loved the idea, others were bothered by the images.

Sheriff Frank Leonbruno says his employees did not mean to offend anyone with the costumes. But we’re in a new era when people take offense to far more things than previous generations, despite the best intentions. That is what landed the sheriff’s office in the crosshairs of criticism.

The horses were covered in white sheets, with holes cut out for their eyes, ears and nose. They also sported bright orange pumpkin lights, FOX 8 reported.

“So, the riders thought what a great idea to have big ghosts going down the street,” the sheriff said. “As the horses went down the street they were lit up for Halloween. To tell you the truth the community loved it, kids said they were great ghost horses.”

However, Sheriff Leonbruno said pictures of the horses adorned in their Halloween costumes and posted on the agency’s social media page received a few negative comments, so they were removed.

“Is there nobody on staff that is like, ‘This is not a good idea?’” said Lake County resident Katelynn Gurbach. “A sheriff’s office should be out there protecting people, and if I saw that on my street, I would be terrified.”

Another resident said he was shocked when he saw the pictures, equating the images to the Ku Klux Klan, Fox 8 reported.

Although the “community loved it,” according to the sheriff, he apologized to the few who found the costumes offensive.

“I’m sorry that perception was there,” Sheriff Leonbruno said.  “It was never our intention to do that.”