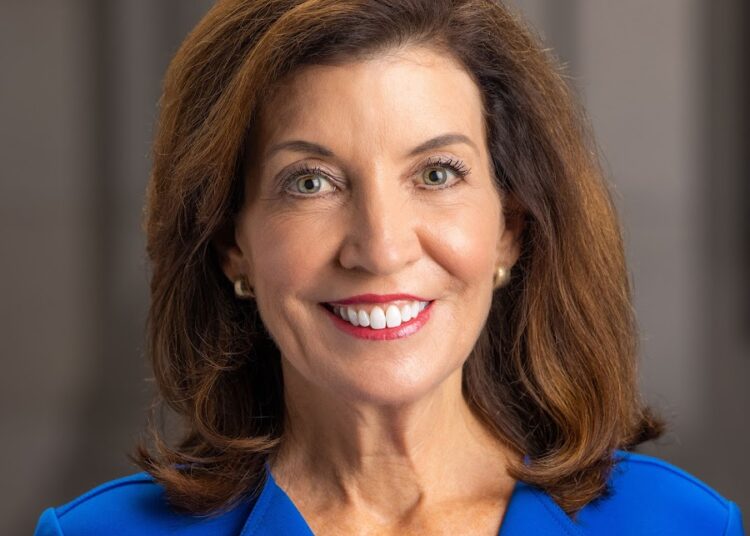 “Our hearts and prayers are with the families and the members of the NYPD, but also, it’s a resounding call to action,” Hochul said during a press conference in Buffalo on Saturday. “We have to do more to fight the scourge of illegal guns on our streets. And we need Washington teaming up with us, teaming up with locals, to get it done.”

New York City Police Officers Jason Rivera, 22, was shot and killed at a Harlem apartment Friday night while answering a call about an argument between a woman and her adult son. Officer Wilbert Mora, 27, remains in grave condition.

Last night, a shot from an illegal gun took the life of a @NYPDnews officer.

When I say we’re going to do everything we can to stop the scourge of illegal guns in our state, it’s not just talk. We are tripling funding for efforts to get these guns off the streets. pic.twitter.com/zXv0xbL4Em

The man police say shot the officers, Lashawn J. McNeil, 47, was on probation for a 2003 felony narcotics conviction in New York City and had a lengthy criminal history.

An illegal Glock 45 that was stolen from Baltimore in 2017 was recovered at the scene, police said.

Fox News reported that Mayor Eric Adams has called on federal authorities to do more to seize illegal guns.

“We’re removing thousands of guns off the street, but there’s an endless flow that continues to come through our city borders,” Adams said. ” I am encouraged by the president’s acknowledgement that we need to collaborate with city, state, and federal entities the way we did during 9-11 to fight terrorism we have to fight the crimes on our street.”

Hochul said during her briefing that while New York has some of the strictest gun control laws in the country, guns are still coming in from other states with looser restrictions and that federal action is needed.