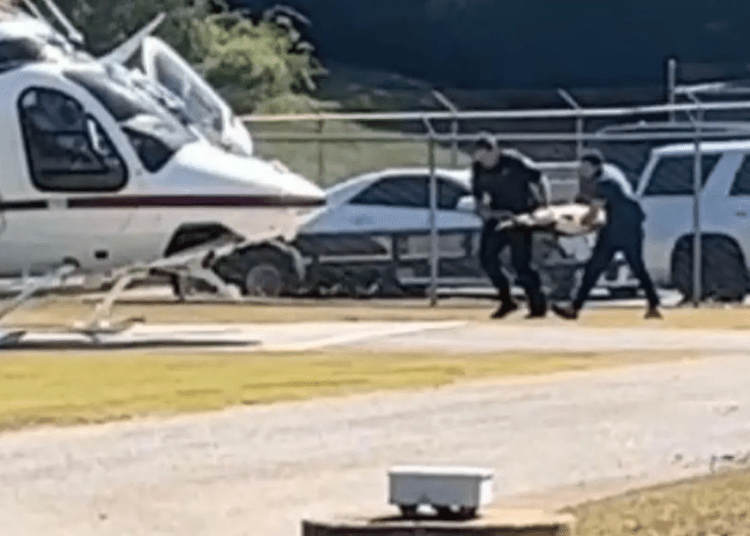 Personnel prepare to board K9 Figo on the helicopter after he was shot multiple times on Friday. (Screenshot Fox 5 Atlanta)

CLAYTON COUNTY, Ga. – The Georgia Bureau of Investigation said a pursuit of a possible murder suspect in Clayton County on Friday ended in a deadly confrontation, which claimed the lives of a police K9 as well as the suspect who shot and killed the police service dog.

The deadly confrontation began just before noon along River Road near Interstate 285 when officers with the Clayton County Police Department spotted a vehicle associated with a murder investigation, Fox 5 Atlanta reported.

GBI said the vehicle in question belonged to a murder victim who had been killed the day before. Georgia State Patrol and the Clayton County Sheriff’s Office were called to assist with the felony car stop.

When police initiated the stop, the driver initially yielded, but then sped off as law enforcement officers exited their vehicles, according to GBI.

State troopers reportedly used a PIT maneuver in an effort to end the pursuit near Flat Shoals Road. The vehicle ended up in the woods.

Despite demands for his peaceful surrender, the driver remained non-compliant.

After a period of time, Georgia State Patrol K9 Figo was deployed into the woods. The suspect opened fire on the police service dog, striking him multiple times, according to Fox 5.

Troopers and deputies returned fire, striking the gunman. He was pronounced dead at the scene.

K9 Figo was rushed by helicopter to Blue Pearl Animal Hospital in Sandy Springs where he later died, Fox reported.

Rest In Peace K9 Figo, Georgia State Police.
K9 Figo was shot and killed in the line of duty today.
He was taken for emergency treatment but sadly, did not survive his injuries.
Our thoughts and prayers go out to K9 Figo’s Handler, friends, family and coworkers. 🇺🇸💙💙🙏🙏🐕 pic.twitter.com/FkUS6qOs2q

West Clayton Elementary School was placed on lockdown during the high risk incident as a precaution.

Witness Delbert Sanders told Fox 5 that an officer was trying to talk to the man when K9 Figo was sent into the woods to “coax the man out.”

Law enforcement authorities have not yet released the suspect’s name. GBI is investigating the officer-involved shooting.