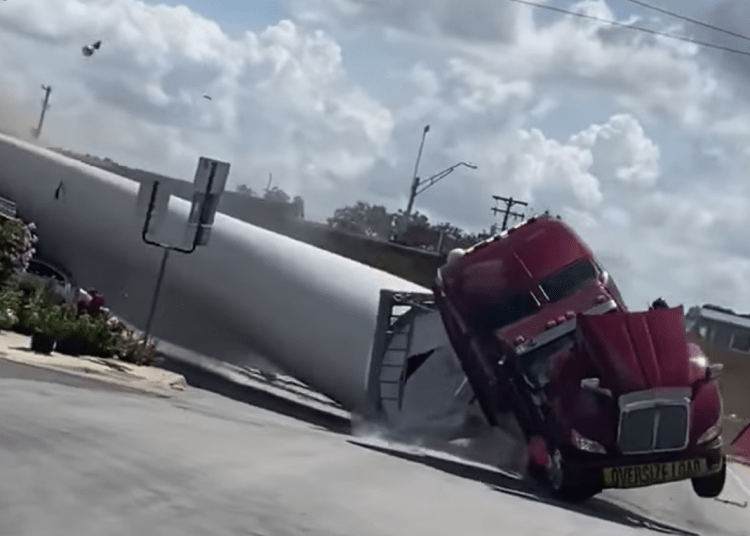 LULING, Texas — Dramatic video captured the moment a freight train barreled through a semi-truck that was carrying what appeared to be a very large individual blade to a wind turbine. The 18-wheeler tried to maneuver a turn and found itself compromised while driving over a set of railroad tracks in Texas on Sunday.

The horrific collision occurred just after 2:30 p.m. in downtown Luling, a city located about 50 miles south of Austin. According to law enforcement authorities, the crossing was clear when the truck attempted to pass but the gates came down before the vehicle could fully clear the tracks due to the overall length of the tractor-trailer, FOX7 Austin reported.

Bystanders at the scene shared video footage of the 18-wheeler crossing the tracks when the gates dropped down on top of the enormous turbine blade — the kind that is used at wind farms — being transported by the trucker. The freight train crashes through the truck’s cargo, upending the truck cab in the process of the violent collision.

Amazingly, no one sustained injuries, according to police. FOX7 reported that It was not immediately clear to what extent the freight train was damaged.

A woman who said she was the truck driver’s wife responded to video posted on Facebook. She said “it was a tight squeeze” through the downtown intersection with the large blade, and the pilot driver leading the journey exited his vehicle to make sure the truck could clear the area, Fox Business reported.

The woman confirmed there were no flashing lights or bars down when they began to cross the tracks, and had no way to know that a train was approaching. By the time they became aware of the danger, the pilot driver jumped into his vehicle to move it while her husband attempted to get the tractor-trailer forward and out of the path of the oncoming train.

“We are giving God the glory that there was (sic) no injuries!” the woman wrote.

Union Pacific railroad police and the Luling Police Department are investigating the collision.