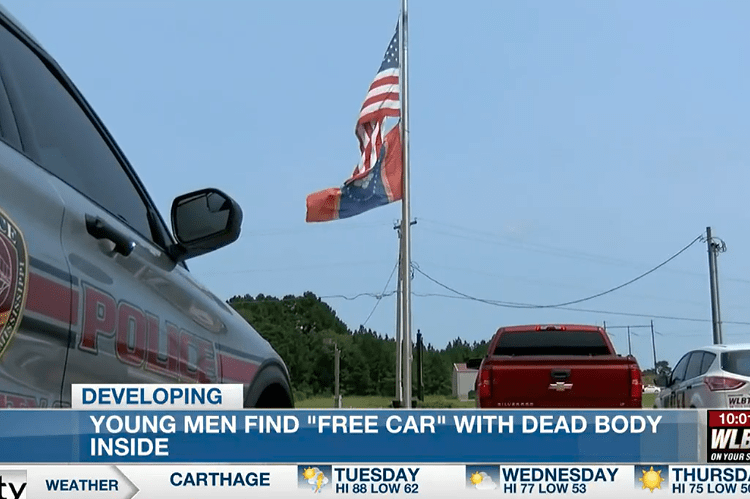 COPIAH COUNTY, Miss. — Law enforcement authorities in Mississippi are investigating the death of a man whose body was loaded into the trunk of a vehicle and unwittingly transported to another county in a “free car.”

Two men who were not immediately identified found the vehicle in the city of Byram with a “free car” sign attached to the vehicle and the key inside. The individuals drove it to neighboring Copiah County over the weekend, according to Copiah County Sheriff Byron Swilley.

Swilley said the men didn’t realized there was a body inside the vehicle’s trunk. They didn’t make the discovery until arriving at the home of a family member, WLBT reported.

Coroner Ellis Stuart said the body has been identified as 34-year-old Anthony McCrillis. Stuart said his body had been in there for several days and was found without clothes. The car belonged to the deceased man.

“He was identified through his tattoos and confirmed through his immediate family of his identity,” Byram Police Chief David Errington said.

Errington said McCrillis was seen alive as recently as 9 p.m. on Friday, with home surveillance video to verify it. He also said McCrillis’s body had no signs of obvious trauma, and authorities are still working to establish the crimes committed and which agency has jurisdiction over the case, Washington Examiner reported.

The chief said the victim’s vehicle was seen in Byram, Copiah County, and Jackson over the last few days. Police have not yet determined where the original crime took place.

Errington said his department will take the lead on the investigation until jurisdiction is settled.

Police did not immediately reveal whether the men who found the car were suspected of committing an offense, or simply stooges who lacked criminal intent.

The chief said an officer spotted McCrillis’ car parked on the side of Old Byram road at 9:30 Saturday morning.

“It stayed there all day long for sure until 6 PM,” Errington said. “Saturday night, it was still seen by another employee from the junkyard.”

The manager of a junkyard called Starz Auto Sales in Byram, Dan Peacock, said he passed by the vehicle on Saturday but noticed it was gone by Sunday, according to WLBT.

“[I] never stopped and looked or anything, but I knew it was kind of unusual,” Peacock said. “I figured somebody was driving down here to sell it. We buy a bunch of cars.”

“I wish I would have looked into it further,” he said.

An autopsy will be completed to determine the cause of death.