The Suspect Had Assaulted Officers 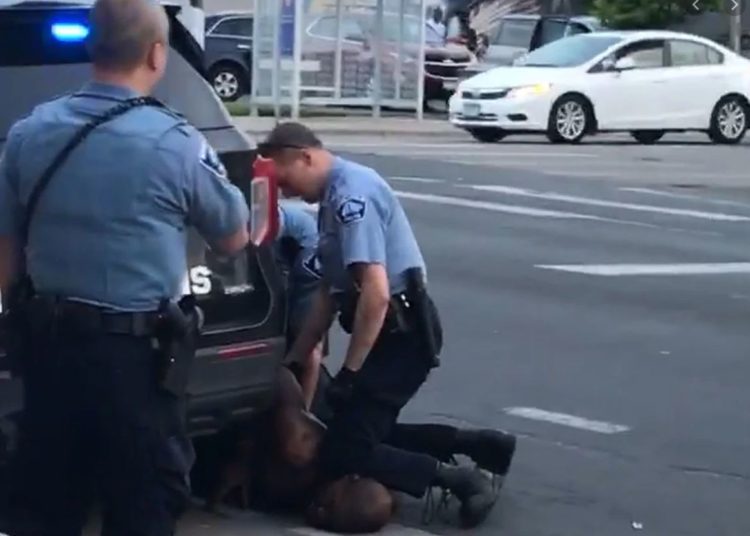 MINNEAPOLIS – Four Minneapolis police officers have been fired after an officer was filmed kneeling on the neck of a man who had pleaded with cops that he could not breathe moments before his death.

According to CBS Minnesota, Minneapolis Police Chief Medaria Arradondo announced on Tuesday that four officers are now ‘former employees’ of the force.

Video footage taken by a bystander emerged earlier today showing an officer pinning George Floyd to the ground moments before he lost consciousness and dies.

Floyd, who was arrested on suspicion of forgery, was heard repeatedly telling officers that he cannot breathe as he lay on the ground next to the tire of a squad car.

After several minutes, one of the officers tells the man to ‘relax.’ ‘Man, I can’t breathe,’ Floyd responds, before eventually passing out.

The officers have not been identified.

The FBI and state law enforcement authorities announced on Tuesday they have launched an investigation into the man’s death.

Ben Crump is the attorney for the Floyd family.

‘This abusive, excessive and inhumane use of force cost the life of a man who was being detained by the police for questioning about a non-violent charge,’ Crump said in a statement.

‘We will seek justice for the family of George Floyd, as we demand answers from the Minnesota Police Department. How many “while black” deaths will it take until the racial profiling and undervaluing of black lives by police finally ends?’

Earlier this morning the Minneapolis Police Department confirmed Floyd died in hospital on Monday after officers had responded to a ‘forgery in progress.’

Floyd was arrested outside Cup Foods grocery store around 8 pm after he allegedly tried to use forged documents at a deli.

Police found the man, believed to be in his 40s, matching the suspect’s description in his car.

‘He was ordered to step from his car. After he got out, he physically resisted officers,’ police spokesman John Elder said in a statement.

‘Officers were able to get the suspect into handcuffs and noted he appeared to be suffering medical distress.’

He was taken by ambulance to Hennepin County Medical Center where he died a short time later, police said.

MINNEAPOLIS – A suspect has died in Minneapolis police custody after video shared online from a bystander showed an officer kneeling on his neck during the arrest as the offender said he couldn’t breathe. His death occurred Monday night.

Preceding the take down was a struggle with police officers, which was not included in video footage posted to Facebook. The custodial death is under investigation by the FBI and state agents, USA Today reported.

Minneapolis Police Chief Medaria Arradondo, speaking to reporters Tuesday morning, was asked about the use of the knee on the man’s neck during the arrest.

“We clearly have policies in place regarding placing someone under control,” Arradondo said, stating that taking a look at what happened and how those policies apply “will be part of the full investigation we’ll do internally.”

The officer involved is white, while the deceased arrestee was black, which enhances the controversy.

Officers were called about 8 p.m. Monday to investigate a report of a forgery at a business, said police spokesman John Elder. According to USA Today, law enforcement officers found the man, believed to be in his 40s, matching the suspect’s description in his car.

“He was ordered to step from his car. After he got out, he physically resisted officers,” Elder said in a statement. “Officers were able to get the suspect into handcuffs and noted he appeared to be suffering medical distress.”

The man, who was not identified, was taken by ambulance to Hennepin County Medical Center where he died a short time later, police said. The officers involved in the call were not identified.

The Minnesota Bureau of Criminal Apprehension has joined the FBI in its investigation. All body camera footage has been turned over to the BCA, which investigates most police shootings and in-custody deaths.

The officers involved have been put on paid administrative leave, per department protocol.