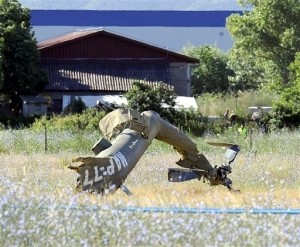 SKOPJE, Macedonia (AP) — A Macedonian police helicopter crashed overnight during a training flight near the southern town of Strumica, killing all four people on board, authorities said Friday.

Interior Minister Gordana Jankulovska said the four crew members were all pilots, each with more than 30 years of flight experience. They were on a night training flight when the MI-17B helicopter hit a 120-meter (394-foot) -high television transmitter near Strumica, about 190 kilometers (120 miles) south of the capital Skopje.

"This is the one of the saddest and darkest days in the Interior Ministry's history," a tearful Jankulovska told reporters in the capital, Skopje.

She said the helicopter, produced in 2008, was serviced regularly and the pilots had not reported any technical problems. Two voice recorders were recovered and were expected to provide more details about the accident, Jankulovska added.

Local TV Nova, quoting eyewitnesses, said the helicopter was circling around with no lights and the pilot was trying to land when it hit the transmitter, crashed and exploded.

Helicopter debris could be seen strewn around the scene, extending about 50 meters (yards) from the crash site.