'Heard too many people tell me that I was wrong' 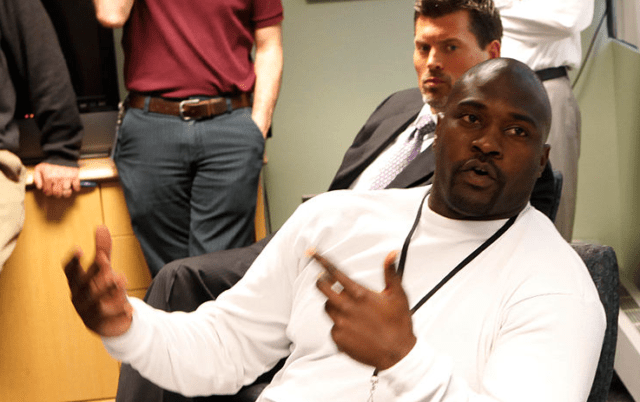 Marcellus Wiley, a former NFL defensive lineman and current member of Fox Sports 1’s “Speak for Yourself,” unleashed on the Black Lives Matter movement after the group removed a page from its site that reprimanded “Western-prescribed nuclear family structure.”

Specifically, content was removed from the section labeled, “What we Believe,” Law Officer reported.

“Heard too many people tell me that I was wrong for misinterpreting BLM’s mission statement and I took their words out of context,” Wiley tweeted out on Monday.

Heard too many people tell me that I was wrong for misinterpreting BLM’s mission statement and I took their words out of context??‍♂️

“You were saying??? #factsoverfeelings #apologyaccepted,” Wiley said in the tweet with a video from June of him stating why it was a bad idea for the NBA to paint “Black Lives Matter” on their courts.

Wiley added: “Seems some have forgotten I navigated from the bottom of this system. I planned & worked to succeed by any means, whether by using my brain or my body! Blessed to be an example of how important a nuclear family is to reaching your full potential. My experience is my expertise.”

“Two things: My family structure is so vital[ly] important to me,” Wiley said in the video. “Not only the one I grew up in but the one I am trying to create right now. Being a father and a husband — that’s my mission in life right now. How do I reconcile that with this mission statement that says, ‘We dismantle the patriarchal practice. We disrupt the Western-prescribed nuclear family structure requirement.

“In 2020, white supremacy is the mission,” Wiley added. “That’s a lot of digging through minutiae right there. I’m on a show that I’m hosting along with another black guy who is hosting with me, who replaced another black guy — and that’s just one example of it. So, I understand. I respect your space. I respect what you’re protesting for. But will you respect others who don’t support that same protest?”

Law Officer reported in June when Wiley along with Jason Whitlock made their comments:

With all the anti-police rhetoric emanating from the sports world, it’s refreshing to hear two high profile, black sports personalities, Jason Whitlock and Marcellus Wiley take on the agenda of Black Lives Matter.

After reading the BLM mission statement, Wiley contested several things that he read, such as, “We dismantle the patriarchal practice,” and, “We disrupt the Western prescribed nuclear family structure requirement.”

As a husband and father, Wiley appeared angry about these objectives as he then began to rattle off the consequences of kids who come from broken homes.

Whitlock slammed NFL owners for caving to the BLM agenda. He objectively referred to BLM as a “Marixsts political organization.”

Wiley and Whitlock’s statements can be seen as part of the Tucker Carlson video below: