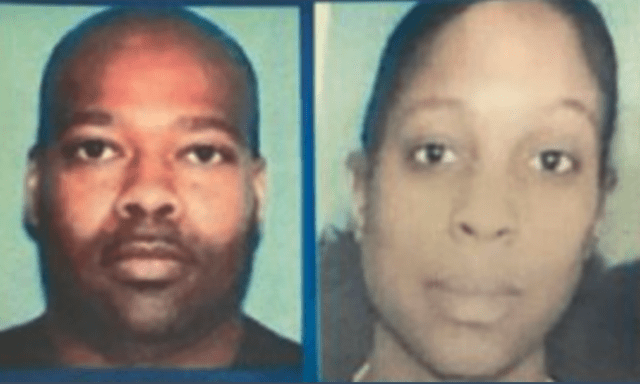 Robert Vicosa and Tia Bynum are wanted for a series of crimes. (Baltimore County Police Department)

Following a manhunt, a Maryland man accused of kidnapping his daughters was found dead Thursday inside an SUV along with his alleged accomplice and his two daughters in an apparent murder-suicide. 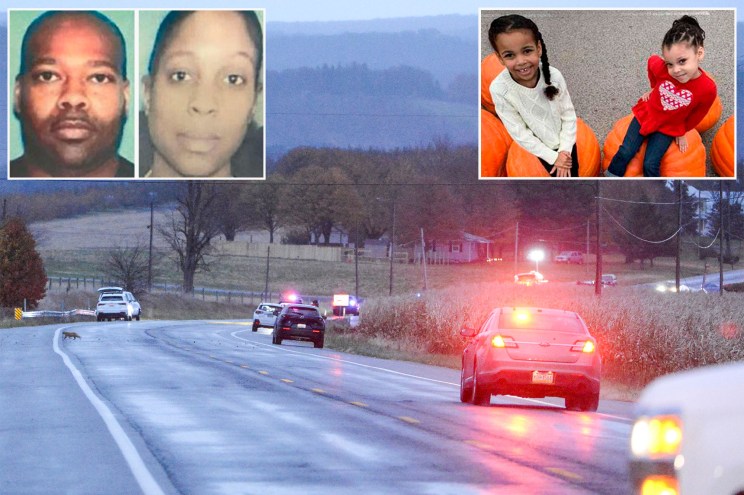 SMITHSBURG, Md. — Maryland State Police spokeswoman Elena Russo said Pennsylvania state troopers, around 2:30 p.m., were attempting to a stop a vehicle that matched the description of a suspect vehicle of an incident in Baltimore County, Maryland. She said the vehicle was traveling south into Maryland, where Maryland state troopers were waiting.

After a short pursuit in Pennsylvania, the vehicle ran off the road and hit a fence line in Maryland, Russo said.

According to the spokeswoman, the Maryland State Police crisis negotiation team attempted to make contact with the passengers of the vehicle. However, a thick layer of smoke inside the automobile made it difficult to see the inside of the vehicle, WBAL-TV reported.

Once police reached the car, they discovered four people suffering from gunshot wounds, a female driver, a man and two girls in the back seat. Three of the occupants died at the scene — the driver, the man and a girl in the back seat. A second girl was flown to a hospital in Hagerstown, but did not survive, authorities said.

Russo did not release the identities of the occupants in the vehicle, but she said they believe the incident is related to two other incidents in Maryland and Pennsylvania.

BALTIMORE COUNTY, Md. — A recently fired Maryland cop and another who is suspended and stripped of police powers are now the subject of a manhunt by the agency that employed them. Law enforcement authorities said the pair should be considered armed and dangerous.

The sequence of crimes began at a home in York County, Pennsylvania, this week. Robert Vicosa, who was fired by the Baltimore County Police Department in August, reportedly held a woman at gunpoint, stole her vehicle and fled with his two daughters, ages 6 and 7, York City Police Department said. The car was later recovered in Red Lion, Pennsylvania, ABC News reported.

The suspects reportedly carjacked a man and forced him to drive them, before releasing the victim unharmed, Baltimore County Police Chief Melissa Hyatt said.

According to police, Vicosa was armed with a handgun, adding that his daughters were present during the criminal activity.

(10:35 a.m.) At 11 o'clock, a news conference will be held in York, Pa., at the York Area Regional PD. #BCoPD Police Chief Melissa Hyatt will be in attendance and speaking during the joint news conference. The search for Robert Vicosa & Tia Bynum continues at this hour. pic.twitter.com/6djtR1ZzKB

Bynum worked in the agency’s Criminal Investigations Bureau when she was suspended and stripped of her police powers, authorities said, without adding further details related to the personnel matters of either individual.

Vicosa and Bynum are wanted by police and they’re “armed with at least one handgun and possibly several semi-automatic rifles,” according to authorities.

During Thursday’s press conference, Chief Hyatt began her remarks with a personal plea to Bynum.

“Our priority is the safety and wellbeing of [Vicosa’s daughters] Giana and Aaminah. Please get these two innocent and precious children to a safe location,” Hyatt said. “We want to work with you on a safe and peaceful resolution.”

She urged the duo to “peacefully surrender to authorities.”