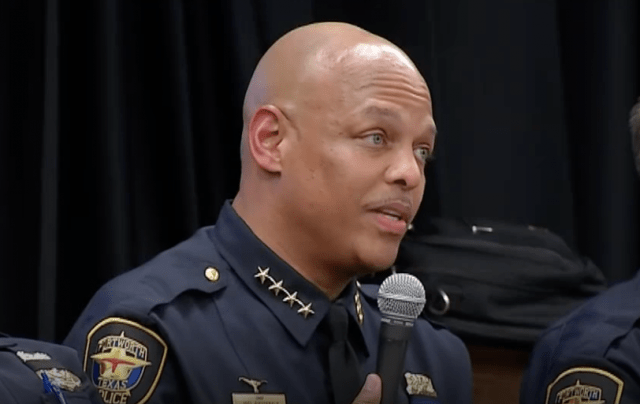 FORT WORTH, Texas – Former Fort Worth Police Chief Joel Fitzgerald said Sunday he’s a whistleblower who was fired within hours of meeting with the FBI about city hall corruption.

In his first interview since his termination in May, Fitzgerald spoke about his lawsuit in which he asks for his job back and details a police investigation he said he ordered into unauthorized city employees allowed to access a sensitive federal law enforcement database.

“I was terminated because I was giving information — about to meet with the FBI,” Fitzgerald said. “They didn’t want that to happen.”

The former chief said FBI agents were provided with information on an inquiry by a special unit in the police department which typically investigates allegations of criminal wrongdoing by officers.

“You can hear a lot in city hall (about corruption), but you can’t prove a lot unless you have witnesses,” he said. “I had a witness.”

Consequently, Fitzgerald said the two provided important information before they were fired.

However, there’s no indication the FBI has launched a formal inquiry and Fitzgerald said he doesn’t know the status of the case — either at the FBI or inside the police department.

“And it’s time to drain that swamp,” he said. “People are angry. People want change. Much like Washington, D.C., people say drain the swamp. Let’s take a real hard look at what the city of Fort Worth is doing.”

When Cooke terminated Fitzgerald, he mentioned nothing about any investigation involving city hall.

Cooke said managers had lost confidence in Fitzgerald’s leadership, listed a number of reasons, and questioned his loyalty to Fort Worth after he applied to be top cop in Baltimore.

The city is under a temporary court order not to name a permanent chief.

Fitzgerald said when he was fired, city managers offered him a large severance if he resigned and agreed not to talk publicly.

He refused and hasn’t been able to find a new job because of the controversy, he said.