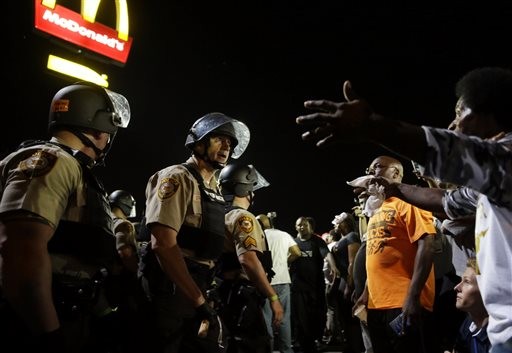 You just can’t make this stuff up…

You heard that right. Wilson—who was cleared by a grand jury and President Obama’s Department of Justice—was recently investigated yet again.

THE GREAT LIES OF FERGUSON

On what planet does this make any sense?

Oh we forgot, we’re on the planet where people ignore common sense (and the law), and listen to activists and social justice whiners who complain when they run out of Gatorade, and demand that others clean the portable toilets in their urban-warfare wonderlands while condoning violence—they very thing they’re supposedly protesting against.

In this instance, according to CBS News, the request came from Brown’s family.

According to the prosecutor, “Could we prove beyond a reasonable doubt that when Darren Wilson shot Michael Brown, he committed murder or manslaughter under Missouri law? After an independent and in-depth review of the evidence, we cannot prove that he did,” Bell, who took office in 2019, told reporters Thursday.

Bell called the incident one of the “most significant moments in St. Louis’ history.”

It was significant that’s for sure, because the lie of “Hands Up, Don’t Shoot” has since mutated into a billion-dollar organization has been brainwashing Americans into believing that eliminating law enforcement is a good thing.

However, all of brainwashing and put-on investigations can excuse the fact that Michael Brown strong-armed an innocent shopkeeper—and then attacked Officer Wilson.

All built on a lie.

The Department of Justice interviewed close to 100 witnesses in their investigation and many of them weren’t exactly fans of law enforcement but they told the truth.

It’s too bad our politicians and leaders can’t do the same. And it’s too bad that Officer Wilson is still dealing with continued investigations by weak-minded leaders who refuse to accept the truth, and prefer to pander instead.

By the way, mainstream media outlets somehow forgot to mention these truths were evidenced by the DOJ under Obama administration. But don’t take our word for it, read the Department of Justice investigation report here.