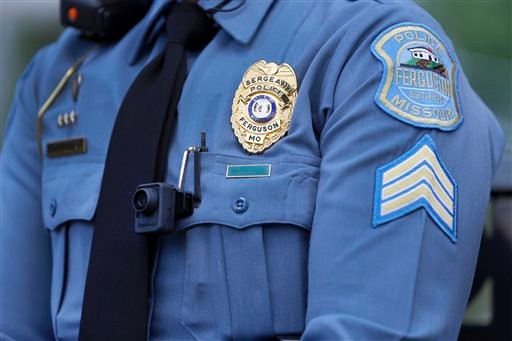 Now the city government, and the streets themselves, look much different.

The city has a new police chief, a new city manager and a new municipal judge — all blacks who replaced white leaders. All Ferguson officers wear body cameras. The city council has new members, too, several of whom are black. And the business district that was at the center of last year's sometimes-violent protests is slowly rebuilding.

The unrest that followed the shooting scarred a proud community, which has spent nearly a year trying to atone for past sins and move ahead.

"For whatever reason in the past — either through lack of communication, lack of outreach — there were segments of the community that really felt like they were disaffected and not really part of the community," said Knowles, who is white. "I think a year later, what you see is a community that's much more engaged, wholly engaged."

Adrian Shropshire, 62, and many other Ferguson residents applaud the changes, especially those aimed at overhauling the police force.

"When it comes to the community and law enforcement coming together, we've both dropped the ball," said Shropshire, who is a black retired carpenter and runs a nonprofit job-training effort. "Most conflicts start with not listening. Everyone's listening now."

Wilson is long gone, having resigned in November, shortly after a St. Louis County grand jury cleared him of wrongdoing. Through his attorneys, he declined interview requests from The Associated Press.

In March, the U.S. Justice Department found no grounds to prosecute Wilson. But at the same time, the government issued a report so critical of Ferguson's police and municipal court system that it hastened an upheaval in the town of 21,000 people, two-thirds of them black.

The result is a leadership becoming more reflective of the town's demographics.

Within days of the federal report, top city officials resigned. The city chose the new judge, city manager and police chief on an interim basis. Two of the three city council members elected in April also are black, so blacks now hold three of six seats, compared with a single seat prior to the election.

The city has made it a priority to recruit more minority officers — an admittedly slow diversification effort that hinges on departmental turnover and the city's ability to fend off area agencies that offer higher pay. At the time of the shooting, just three of Ferguson's 53 officers were black. The department now has five African-Americans among a total of 50 officers, including the newly appointed interim chief, and has four budgeted positions still to fill, according to figures the city supplied to The Associated Press this week.

Within weeks of Brown's death, Ferguson police began wearing body cameras donated to the city. Steps have been taken to establish a citizen police review board. Reforms in the police department and municipal courts have led to fewer traffic stops and fewer fines — and dealt a blow to the city budget.

In the first six months of the fiscal year that ended June 30, the city had a revenue deficit of almost $700,000 "due entirely to the shortfall in fines and public safety revenues," according to a February report from the city finance director. Financial details for the full fiscal year have not been compiled, City Clerk Megan Asikainen said.

Interim Police Chief Andre Anderson wants officers engaging with the community, doing things like getting out of their cars and mingling. He has publicly acknowledged that he hopes to be considered for the job permanently, and has implored the city's populace to help him "set a course in the history books that clearly proves that peace prevails."

But some residents question the improvements. Emily Davis says she has seen little change for the better, especially along the busy roadway that was looted and burned.

"People are still being targeted by police officers," the 38-year-old said. "If you talk to people who live on West Florissant, that is still happening. Our city government has not become any more communicative. They have not made any attempt to engage in dialogue — meaningful dialogue — with the citizens, which is not any different than it was a year ago."

In May, on what would have been Michael Brown's 19th birthday, family and community members cleared out a collection of stuffed animals, candles and other trinkets that for months served as a shrine in the middle of Canfield Drive, the site of the shooting. A permanent plaque in his memory was installed nearby.

Just a half mile away, the site of a QuikTrip that was looted and torched a night after Brown's death is being transformed. The lot that had been the nexus of protests will become an "empowerment" center destined to offer workforce training and employment placement for underserved youth.

Elsewhere, major employers are hosting job fairs, and the University of Missouri-St. Louis is offering scholarships, all with a focus on helping minorities find better jobs.

Several businesses closed after the riots of August and November. Boarded-up buildings remain along parts of West Florissant Avenue. Others reopened, but recouping clientele has been slow.

West Florissant is poised to get $37 million in upgrades. The improvement plan is expected to include bricked sidewalks, bicycle lanes, stylish lampposts and landscaping.

State Sen. Jamilah Nasheed, a black Democrat from St. Louis and a frequent Ferguson protester, said she has seen "drastic" improvements in the community. She called the response to Brown's death a "defining moment in American history."

"The cries from the people — it didn't land on deaf ears," Nasheed said. "They rose up and they did something that was very significant when it comes to race relations in America. And it was a great thing."