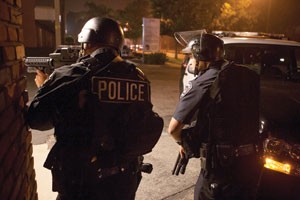 A song? A romantic comedy? A line from a 1700s poem? Yes, and a not-so-gentle reminder that tactical decision making will help you stay safe and out of the hot seat.

Those who serve and protect are not fools, but “foolish” means “showing a lack of good judgment.” As imperfect humans, we have unnecessarily rushed into situations without a plan, or without appropriate back-up; and we have all used tactics or techniques that could be described as “lacking of good judgment.” We may not like to second-guess others and we might even hate it more when others do it to us, but as professionals we should at least review our own actions as we strive for improvement.

We are sometimes called upon to “rush in” but it is bravery and valor, not foolishness, behind our willingness to take swift action to protect those in harm’s way. Where lives are in imminent jeopardy we act immediately, almost instinctively, and people could die if we suffer “analysis paralysis.”

Not every situation involves an imminent threat and we can probably do a better job of discerning when we should rush in and when we should wait for additional resources and formulate a plan. If we see a wanted man with a history of violence walking down the street, should we stop and jump out or observe and call for back-up and coordinate a response? Maybe our favorite television heroes would roll their eyes and scoff at the idea, but they might not be accepted as heroes in real-life modern America.

Sometimes we are hailed as heroes when we make a hasty entry into a chaotic scene, alone and without a plan; but sometimes we are ridiculed, fired, sued and even prosecuted.

According to the Supreme Court, reasonableness is judged from the perspective of a reasonable officer on the scene, without the benefit of 20/20 hindsight and must allow for the fact that officers are forced to make split-second decisions in tense, uncertain and rapidly evolving circumstances. In November, 2015 the Court clarified that an officer is immune unless it is “beyond debate” that his/her actions violated the constitution.

Some communities, agencies and courts apply the reasonableness standard to all of an officer’s actions leading up to a use of force. Maybe not (yet) where you are, but many officers face this situation today. This reality is unchanged by no matter how disgusted we may be at those who blame the officer, or no matter how much we believe the focus should be on the suspect instead.

More than 20 years ago one U.S. Court of Appeals wrote, “The reasonableness of [an officer’s] actions depends … on whether [the officer’s] own reckless or deliberate conduct during the seizure unreasonably created the need to use such force.” Portland Police Bureau policy requires that officers “…use sound tactics and good decision making during a confrontation…” Los Angeles Police Department manual reads, “The reasonableness of an officer’s use of deadly force includes consideration of the officer’s tactical conduct and decisions leading up to the use of deadly force.”

I am not suggesting that officers should be charged, sued or disciplined when they make split-second tactical decisions in tense, uncertain and rapidly-evolving situations-not even when, in hindsight, it appears those decisions could have been better. I am suggesting that, as professionals, we should not settle for good enough (a determination that we did not violate policy) but we should figure out how we can do it better next time.

Some have been living these concepts for a long time but too many officers and agencies have never even considered asking these questions. Next time you reflect on your response to a situation, ask yourself:

Asking ourselves these types of questions after an incident, and applying what we learn, will help keep everyone safe and help minimize risk in the future.

The author, Donald R. Weaver, is an attorney who specializes in law enforcement matters, including officer representation, police training and risk management. He spent 13-years as a police officer in Missouri and California and has worked various assignments including patrol, SWAT, overt and covert drug investigations, street crimes, forensic evidence and policy coordinator.