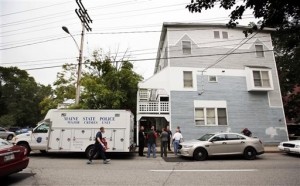 SACO, Maine (AP) — Neighbors struggled to make sense of the shooting deaths of a family of five in which the father was known to many throughout their apartment complex as a friendly maintenance worker.

Three children ranging from 4 to 12 were among the victims discovered Sunday in their home along with a long-barreled gun believed to have been used in their deaths. A detective said murder-suicide was one of the scenarios being investigated.

"I still don't want to believe it," said Heather Nason, who used to babysit the three children. "I love those children like they were my own."

Investigators said it appeared no one outside the family was responsible for the shootings. They planned to release the identities on Monday.

The grisly discovery was made after a family friend contacted an apartment complex worker to express concerns about the family's well-being, investigators said. The worker entered the apartment and discovered one body, then immediately called police.

Police said the bodies were found in three bedrooms. Police described the firearm found in the apartment as a long gun. Shell casings also were recovered.

Neighbors described the father as well known in the apartment complex along the Saco River because he was one of the maintenance workers.

They described a friendly family with a 4-year-old girl and boys aged 7 and 12 who were part of a group of neighborhood kids who constantly rode their bikes or played tag and other games in a community that residents described as safe. The parents were in their 30s.

"The kids were great. They were just happy kids, and it's just a huge shock," said Nason, who with her husband Dellas placed flowers outside the apartment on Sunday. As for the parents, "they'd take the shirt off their back for you," she said.

Police believe the shootings happened at about 11:30 p.m. Saturday, based on reports from neighbors about loud noises coming from the apartment.

State and local police, along with the medical examiner, were at the scene Sunday night. Officials said autopsies were scheduled for Monday.

The droves of children who usually circle the complex were all inside Sunday evening, replaced by concerned adults watching the police.

Down the street, Vin Savage watched with a stunned look on his face. "This is a tragedy," he said. "It's mind-boggling."