The event will be held July 12 in Fergus Falls

Retired Texas Police Officer Jimmy Meeks has become obsessed with a particular word: Encouragement. Quick to admit that in his 35 years he never policed in an environment like today’s, he has given himself to encouraging officers across the United States.

“I know when I get bummed out, a word of encouragement often lifts me up. It’s happened a thousand times. So I’m just going to ‘pay it forward,’” Meeks said.

He recently completed a 6,200 mile trip across the country, stopping at police departments along the way, encouraging officers at every opportunity. None of the departments were expecting him, but several allowed him to address officers at roll-call.

“I showed up in Chicago and the Watch Commander told me to ‘get in there and encourage the officers.’ Same thing happened in Portland and Denver. It was a blast.”

Meeks has also initiated another project, the Blue Life Support Seminars. The first one is scheduled for July 12 in Fergus Falls, Minnesota – 177 miles from Minneapolis.

“I was thrilled this morning when I saw that Minneapolis officers are registering, as well as other officers from across the state, and even from North Dakota.”

When Meeks saw that a Minneapolis officer had registered, he got him on the phone in minutes.

“He told me he was coming because he ‘needed to,’ Meeks said. “I had to fight back the tears when I talked to him. He made it clear that he needed whatever we had to offer.”

Both Minnesota and North Dakota have agreed to award 8 hours POST credit to officers who attend. Presenters will address various topics, all relevant to policing: verbal deescalation, resilience, sleep deprivation, family life, to name a few.

There will also be a service the night before, where officers will be honored.

Initially, the cost to attend was $50.00, or $75.00 if officers brought their spouse. But after all the chaos in Minnesota, Meeks decided to “step out in faith” and waive the fee.

“My heart has been torn over what the officers in Minnesota have endured. I just decided to cry out to God and plead for the necessary funds to host the seminar.”

A church in Fergus Falls is allowing Meeks and his team to host the seminar at their location, while another church is providing lunch at no cost to the officers.

“I’m excited about how it’s coming together. Hotels are giving discounts and all kinds of good things are happening. One place even has some dorm rooms, and have agreed to allow officers to stay there at no cost.” Meeks said.

The seminar features over 170 years of police-related experience. Dan Phillips, a former US Marshall, is among the speakers. Phillips is the founder of Responder Health, an organization committed to helping first responders.

Texas officer Greg Stevens will also address the crowd. In May of 2015, Stevens fatally wounded two ISIS terrorists who had shown up at a convention center with intentions of committing mass murder. Stevens received the Presidential Medal of Valor for his heroics.

Medal of Valor recipient Chris Amos will also be there. Years ago Amos was shot twice while chasing a drug suspect.

Former Atlanta, GA Officer Tyrone Dennis is scheduled to speak. Dennis is known for his Clippers and Cops program in Atalanta. He is a noted expert on building – and improving – relationships between the police and the community. He’s been featured in media outlets across the country. Twenty-six year North Dakota Trooper Tracy Brumfield will also speak.

During lunch, officers will hear a presentation from a 25-year retired Minnesota officer who now teaches classes on financial wellness for police officers. “Cops and cash don’t always go together,” Meeks admitted. “A lot of the stress in the lives of officers is not from the turbulence on the streets, but from the financial rut they find themselves in. We want to help there, too.”

For more about the seminar, or to register, click here. 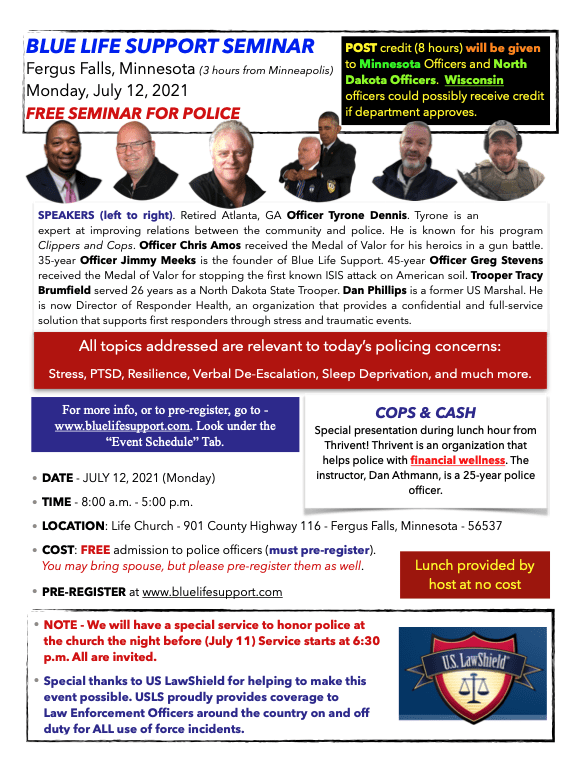