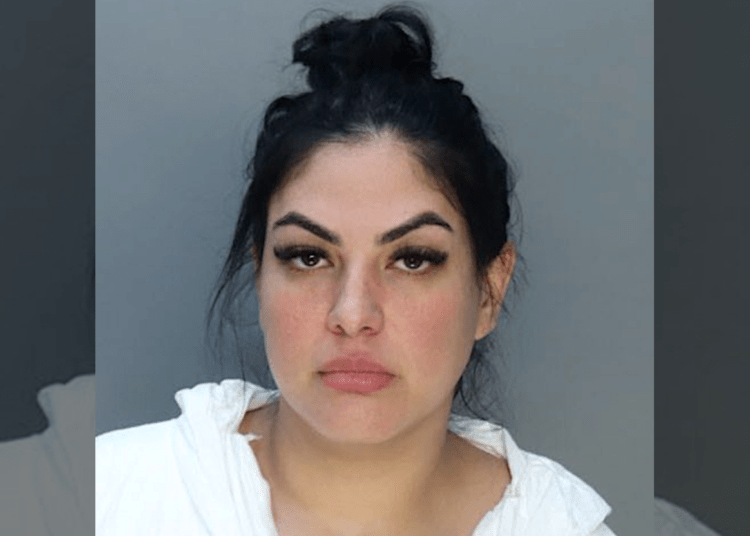 HIALEAH, Fla. – A recently fired Miami-Dade school police officer has reportedly confessed on camera to critically shooting her estranged boyfriend who is an active duty Miami-Dade police officer. The woman admitted to committing the attempted murder after “she actively tracked the victim via electronic means,” reported WPLG, citing a police report.

The police report also notes that a “closed-circuit television camera” — perhaps a home security system — “captured the incident in its entirety” and that the victim was shot “in the head.”

The suspect was identified as 32-year-old Yessenia Sanchez, according to Miami-Dade jail records reviewed by Law&Crime on Saturday morning. She is charged with first-degree attempted murder with a deadly weapon and aggravated stalking, and is being held without bond.

Moreover, Sanchez faces a separate case involving one count of leaving the scene of an accident involving property damage, according to the news outlet.

The victim has been identified at several news outlets as Damian Colon. Hialeah Police Sgt. Jose Torres said Friday the officer is in “extremely” critical condition.

The Miami-Dade Police Department said Friday the victim “is out of surgery and is listed in critical but stable condition.”

Early Saturday the Miami Herald reported that Colon was “clinging to life.”

A positive update about @MiamiDadePD officer Damian Colon, a 17-year veteran of the department, who was shot in the head by an ex this morning in Hialeah. @WPLGLocal10 https://t.co/kB26jfkWnE https://t.co/ztyCgfVdtg pic.twitter.com/3eFIiwDxZv

Colon is a 17-year veteran of the Miami-Dade Police Department. He was off-duty at his parents home when he was shot, Law&Crime reported Friday.

MIAMI – A Miami-Dade police officer was shot and transported to the hospital in critical condition early Friday morning. The crime involved a recently terminated female officer who is accused of firing at the male, striking him in the head. Officials are referring to the shooting as domestic violence.

The critically wounded officer has not been identified. He had been in a relationship with the woman accused in the shooting, a former Miami-Dade Schools officer, the New York Post reported.

The male officer was off-duty in Hialeah when he was shot. The suspect has been taken into custody, Miami-Dade Police (MDPD) said.

During this difficult time, I ask for your prayers for the officers family and the MDPD family. https://t.co/0LLXlppb7L

“One of our MDPD officers was shot off-duty in what appears to be a domestic incident,” the department said on Twitter.

Jackson Memorial Hospital in Miami was swarmed with the victim’s fellow officers. He remained in the facility’s trauma unit Friday morning.

There were no further details immediately available at the time of publication. Officials said they would provide updates later in the day.

“We ask for your prayers,” the agency tweeted Friday morning.