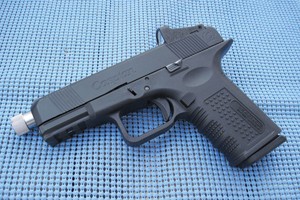 Author’s Note: Seldom does new gear enhance performance. Often, it just hurts the family budget. So if I find something that works, I stay with it unless something proves to be better.

As a longtime writer, I occasionally get items sent to me for evaluation and I pride myself on taking the time to carefully consider them before I either dismiss or recommend. Following are some LE items that are worth a look.

Lone Wolf’s Timberwolf Frame
I’m a fan of the Glock pistol but can’t shoot the gun well unless I have the grip modified. The Luger-like angle of the standard grip shoots high for me once I lock my wrists naturally. Unless I want to adopt a grip angle that’s artificial, I must modify the grip on my Glock pistols.

I’ve spoken with many shooters who like the idea of a different grip angle on their Glock but can’t bring themselves to have the factory grip cut on. Although the fourth generation Glock pistol solved this dilemma for some, the grip is still too large for others. The solution to this problem has been answered by Lone Wolf Distributors and their Timberwolf frame.

The Timberwolf is made from high-strength polymer and incorporates many of the features custom gunsmiths build into Glock frame modifications.

First, the Timberwolf frame offers the shooter interchangeable back straps so that the grip can be made as large or small as desired. The flat back strap feels like a wide 1911 with a flat mainspring housing, while the curved version feels like a SIG-Sauer P-228/M-11.

The grip is checkered with slight finger grooves in the front strap. I’m not a fan of finger grooves because I want to place my fingers where they want to go—not where the frame tries to push them. But these grooves aren’t so pronounced that I feel I’m being forced into a “compulsive grip.”

Other features include a high-grip cut at the rear of the trigger guard, an extended magazine release button for faster reloads, a high grip angle to get the hand higher on the back strap and closer to the bore line for better recoil control, an extended beavertail to stop “slide bite” on the web of the hand, a round trigger guard and a Picatinny frame rail for the mounting of lights and laser sights.

Although the Timberwolf has been available for the full size G17/22 pistols for many years, the frame I worked with was a prototype G19 compact model. The frame should be available by the time you read this, and I think it’s going to be a real hit with cops and legally armed citizens.
www.lonewolfdist.com

Gould & Goodrich’s Holster
I recently received a box from Gould & Goodrich (G & G), one of the largest manufacturers of law enforcement leather duty gear in America. It contained a few items they introduced to the law enforcement market, one of which caught my eye: a “half holster.” The rig is basically a single piece of die cut leather with a suede backing. The rear slot is cut so a flap of leather covers the trigger guard. I remember thinking: Who would use such a silly design? Well folks, for the umpteenth time in my life, I was wrong. I’ve been using the G & G 893-2 with both my Glock 19 and 26 with great satisfaction.

The holster is designed to create a pocket between itself and the waistband. As the gun is inserted, the holster forms around it with the suede holding it snug. I realized the proper way to seat the gun was to place the muzzle into the pocket and then use the shooting hand to depress it into place. This is accomplished by having the index and middle fingers hook the square edge on the rear belt slot, while the thumb presses down on the grip tang until the fingers feel the trigger guard seat.

The rig is comfortable, concealable and reasonably fast. Once the gun is removed, the holster is pushed flat and forgotten until it’s needed. The package says it will fit all Glocks and I have no reason to believe it won’t. I’ve said for many years, simple is good, and the G & G 893 just bears this out. I plan to continue to use mine because it’s light, simple, effective and certainly inexpensive.
www.gouldusa.com

Fenix’s E11 LED
I learned the hard way how important it is to have some type of white light with you at all times. The issue is many cops don’t want to have a large chunk of tubular metal in their pocket at all times—no matter how compact it is. I think I found a solution: the Fenix E11. Not much larger than a tube of lipstick, the E11 offers 115 lumens of light delivered via a Cree XP-E LED—one of the best, most robust LEDs in the industry. If a lower level of light is needed, the E11 also offers a 32-lumen level, but the change isn’t part of the tail-cap switch.

I’ve come to detest handheld lights that offer different modes of light by tapping the tail cap. What if I need the highest level of light, but when I depress the switch I get a lower setting or a strobe? Now I’m smacking the switch trying to get the light I need, all while whatever I’m trying to illuminate has either moved or decide to attack. Not good, folks.

But this isn’t the case with the E11. A turn of the light bezel changes the level of light—a feature I really appreciate. Powered by a single AA battery, the E11 is made with rugged aircraft aluminum and features a run time (on high) of just under two hours. The light is waterproof to a depth of one meter and comes with a lanyard and spare rubber tail cap switch. I originally placed a pocket clip from another light on the E11, but soon took it off because I came to like the smooth, trim profile. When wearing a pair of jeans, the E11 rides in the change pocket just above my right front pocket with no problem. And the best part is the E11 only cost me $27 at REI.
www.fenixgear.com