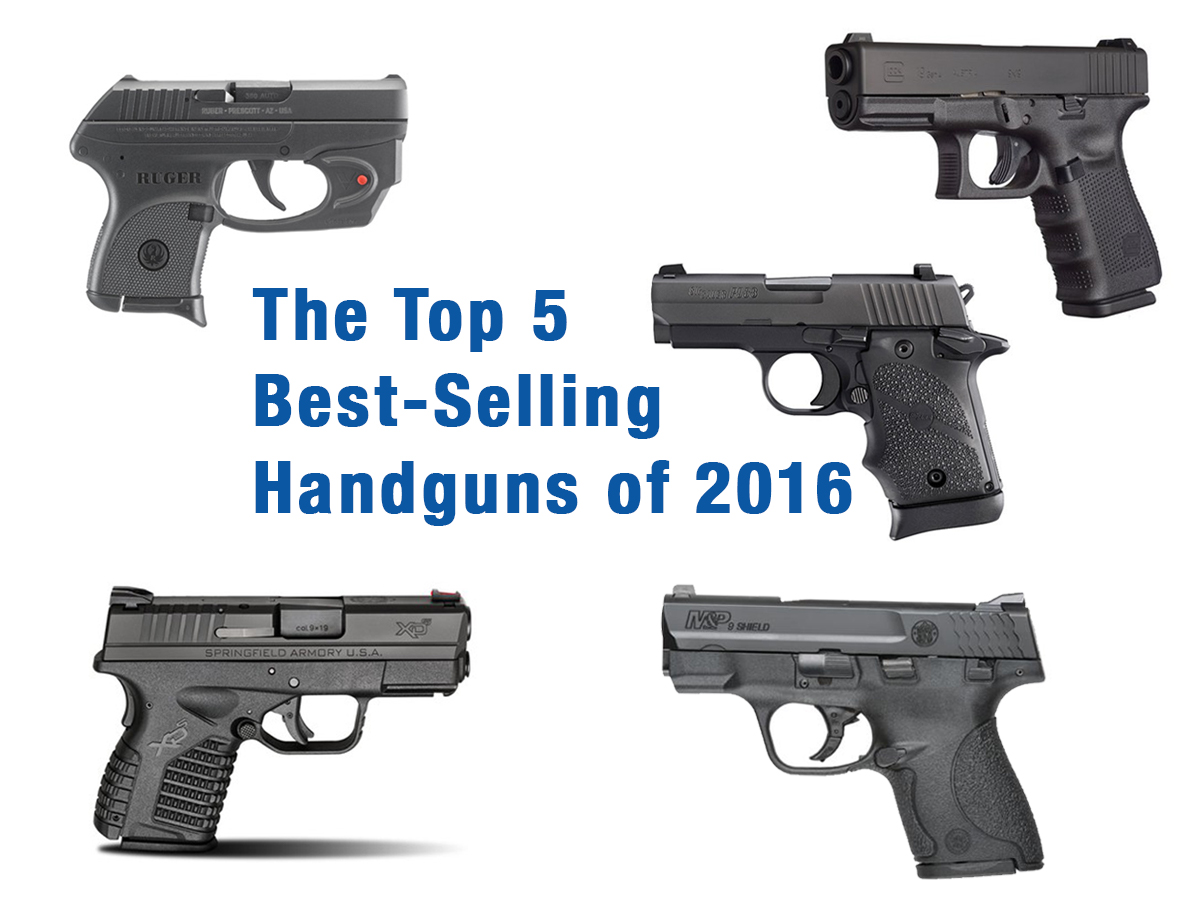 This could be a record year for gun sales, as indicated by the number of NICS background checks for firearm purchase—with 5 models at the top of the best-sellers list.

While the makes and models differ, there are a few things the top-selling handguns share a lot in common: the most popular choices are smaller profiles, easier concealment, without sacrificing ruggedness and accuracy, according to a handgun sales analysis from The Motley Fool.

This year will likely close with the Smith & Wesson M&P Shield as the top-selling pistol, according to the analysis report. The M&P (Military & Police) pistols, including the M&P Shield and M&P 15 Auto models, feature lightweight, concealable, models in 9mm, 40 S&W, and .45 auto calibers with polymer frames. Various M&P models are widely used by law enforcement agencies and military personnel, who often cite the ease-of-use, ergonomics, slim profile, and overall accuracy as the main reasons in choosing this pistol—which also account for its top-ranking sales position.

Ruger’s LCP (Lightweight Compact Pistol) offers superior concealability; it’s a 9.4-ounce, ultra-light .380 pocket pistol. Ruger introduced the pistol in 2008 to serve the needs of civilians demanding a lightweight, defensive pistol—and as the steady sales of this model suggest, the demand for a pocket-sized personal defense is still going strong.

The Ruger LCP features a glass-filled, nylon frame with a “single-strike double-action” firing mechanism. The newer LCP II model offers improved sights, and a more substantial grip, designed for better recoil distribution, along with a shorter, tighter single-action trigger action (which also has an inner-trigger safety).

The Springfield XD-S was launched by Springfield Armory in 2012 and is available in only 9mm and .45 ACP calibers. And much like the Smith & Wesson M&P Shield, the Springfield XD-S also has a polymer frame and a striker-firing mechanism. Springfield’s XD model pistols are approved and used by many law enforcement agencies, which accounts in part for its popularity.

The Motley Fool report lists the SIG Sauer P938 as the contender for the fourth best-selling pistol of 2016. The SIG P938 is a single-action 9mm, sub-compact pistol. And while it offers a small frame like the other best-selling models on the list, it has a distinct feature worth noting: the P938 has an all-metal frame made from stainless steel and aluminum alloy—and still lighter than the Springfield XD-S and M&P Shield.

And despite the premium versions of the P938—which come with premium price tags (between $600-800)—the SIG Sauer P938 will most likely remain one of the top-five best-selling pistols of 2016, according to analyst expectations.

Rounding out the list is the Glock 19: the smaller-sized version of the 9mm Glock 17. Like the other pistols on the list—except for the P938—the Glock 19 has a polymer-frame and striker-firing mechanism (as many of us who carry one on duty know quite well). The small size and reliability of the Glock 19 have made it a popular back-up gun (BUG) and also popular as a concealed-carry handgun of choice among off-duty law enforcement officers and civilians just the same.

And while popularity counts for some things (like “most-popular” lists like this one), personal preference, reliability, and safety matter most of all. So whether you’re looking for a back-up gun, a pistol for off-duty, or a concealed-carry gift for friends or family, please choose wisely—and safely.

Disclaimer: This LawOfficer.com News article is based upon a financial news analysis report; and is not in any way an endorsement for or against any particular brand or model of firearm.