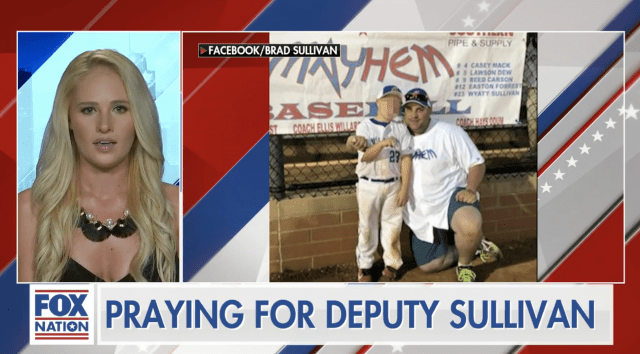 There is an emotional plea being made on behalf of Deputy Brad Sullivan who is fighting for his life after suffering a critical gunshot wound to the head. The deputy has now been shot twice in the past three years.

Fox Nation host Tomi Lahren made the plea to viewers asking them to pray for the condition of Sullivan who is battling to stay alive after sustaining the head shot responding to a call earlier this month.

“Deputy Sullivan, we love you, we appreciate you and we are thinking of you — keep fighting.”

“I could sit here and talk about Ukraine and impeachment and transcripts and presidential harassment but if you’re like me, you’ve had enough of it, so instead I’m going to talk about something I think is a little more important,” said Lahren on her Fox Nation show “First & Final Thoughts.”

Deputy Sullivan, of Madison County, Mississippi, responded to calls on September 5th that a man had been abducted and tied up inside a local home, WLBT reported.

When Sullivan arrived at the scene, the suspect, now identified as Edgar Egbert, fled and led the officers on a chase before firing off 90 rounds, hitting Sullivan in the head.

Sullivan was in the process of fully recovering from a 2016 gunshot wound he received while apprehending a violent habitual offender during a traffic stop at the time of this shooting, Lahren explained.

The deputy was honored in 2016 by the Mississippi Center for Police & Sheriffs for his service, and was deemed a “top cop,” and “well-respected officer” by local officials.

In addition to his professional duties, Sullivan is a little league baseball coach and single father of a 9-year-old boy, reported FOX News.

Our thoughts are with our extended family at the Madison Co Sheriff’s Office and our prayers with the deputies injured in yesterday’s ordeal.

It is a true example of the dangers law officers face daily and the continued selfless sacrifice made by courageous people. #BlueStrong

“On behalf of the Madison County Sheriff’s Office, thank you very much for your prayers, thoughts, emails and offers to help in any way possible…that is really what we can all do right now,” he said.

Moreover, Governor Phil Bryant tweeted about the situation shortly after it tragically occurred.

Sending prayers to the officers wounded in today’s shooting. Thank you Madison County Sheriffs Department, @MissDPS, MBI and first responders for their work and response to the shooting.

Sullivan is currently at the University of Mississippi Medical Center Intensive Care Unit and remains in critical condition.

If you are a person who prays, now is the time to remember Deputy Sullivan.

The suspect is being held without bond and is facing multiple charges including six counts of attempted murder of law enforcement officers, one count of kidnapping and one count of felony fleeing.

“Deputy Sullivan,” Lahren concluded, “We love you, we appreciate you and we are thinking about you. Keep fighting, you’ve got this,” she said. “To my fans, followers, and FoxNation family, please keep Brad Sullivan in your prayers.”