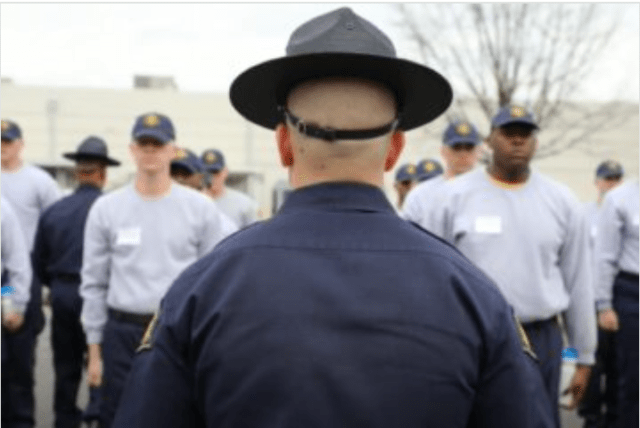 The brim of the academy instructor’s campaign hat shudders just inches from the forehead of the rigid cadet straining not to bend over backward to retreat from the intense tirade. It was a typical start to a day that would be filled with push-ups and classroom studies. Even the “fun” stuff like arrest control, driving, and firearms would be accompanied by fast-paced commands demanding perfection while providing distractions, intense scrutiny, and insults.

Not everyone agrees with this military basic training approach. The philosophy was to break a trainee down and rebuild them. Creating physical and mental stress was designed to allow the trainee to develop the confidence that they can overcome whatever was thrown at them. Normalizing stress was a means of teaching coping skills for the stress they would be called on to endure in combat.

Others advocate for a supportive, collegiate-type police training academy that develops skills without creating artificial stress. In fact, within some police reform efforts are proposals to get away from a police subculture developed from basic academy training that demands that cadets suppress their emotions. The accused culture of toxic masculinity, imposed on men and women alike, is presumed to be damaging to police officers to the extent that they cannot deal with others in crisis and will, themselves, inevitably implode into brutality. The answer? A kinder, gentler training regimen that emphasizes empathy over aggression and self-awareness over tactical skill.

Police aggression and misconduct are believed to be related to the stresses of the job. While police work is accepted as an exceptionally stressful occupation by most, it is not these stressors that are blamed but rather the police officers’ conditioning to suppress and ignore their own emotions that produce bad results. In order to fully suppress one’s own emotions as purportedly their culture and training demands, one must keep a lid on their peer’s feelings as well. Police reformers believe that by increasing sensitivity to the feelings of police officers, they will be less stressed themselves and less aggressive in dealing with suspects.

Here’s this writer’s theory. First, let me explain that I’ve been on both sides of the training/trainee/trainer spectrum. My limits were pushed in Army basic training. My bed-making skills were trashed by a drill sergeant. My ancestry was impugned up to the point of my willingness to spend time in the stockade. But my skinny, intimidated self evolved quickly into a man that was ready to deal with whatever life threw my way. Every victory of survival was a building block of my character. Every insult that I was able to let fly past without wounding me thickened my armor.

My theory is that subjecting trainees to physical and mental stress in a controlled environment is a necessary element of practice for the time when stressful situations threaten to overwhelm them in an uncontrolled environment. The old maxim in psychology is that frustration results in aggression. Aggression can be exhibited outwardly as anger or violence, or inwardly in self-destructive behavior. Stress is often considered the culprit that causes frustration. But what really causes frustration is the feeling that something is out of one’s control. Therefore, what we learn about controlling our reaction to stressful circumstances increases our ability to automatically process emotion, reducing frustration and the resulting aggression.

Do we need to be supportive of the mental health of our police? No question. Do we need to be more open about providing services to our first responders without shame? Of course! Do we need to expose our officers in training to some simulation of the chaos and pressure they will inevitably confront on the job? Absolutely.

There is, of course, a balance between stress-inducing training and unnecessary mind games. Building character and resilience requires not only confrontation with one’s potential weaknesses but supporting and enhancing the strengths that training develops. Learning to perform under stress, to control emotions rather than ceding control to our emotions, and – yes – being tough is still an essential of police work.

About the author: Joel Shults is a retired police chief. He is an award winning writer, college professor, trainer, and first responder chaplain. He is the author of several law enforcement related books and articles. Shults currently serves as a municipal judge and a coroner’s investigator in rural southern Colorado.