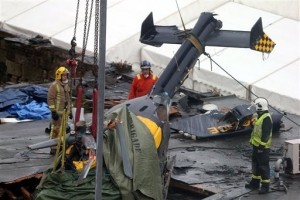 GLASGOW, Scotland (AP) — Scotland's official holiday was transformed into a grim day of mourning Saturday as emergency crews searched the wreckage of a riverside pub smashed by a falling police helicopter. At least eight people died and more than a dozen remained hospitalized with serious injuries.

The Clutha, a popular Glasgow pub, was filled with revelers enjoying a local ska band on Friday night, the eve of St. Andrew's Day, named for the patron saint of Scotland and which is normally a celebration of Scottish culture and heritage.

Instead, Scotland's leader ordered flags at government buildings to be lowered to half-staff after the tragedy.

"This is a black day for Glasgow and Scotland, but it's also St. Andrew's Day, and it's a day we can take pride and courage in how we respond to adversity and tragedy," Scottish First Minister Alex Salmond said.

There may be more bad news. Police said a rescue and recovery operation is ongoing and that it wasn't clear what will be found once the aircraft's wreckage is removed. The process may take days.

That means more waiting for people who don't know if their loved ones were in The Clutha at the fateful moment when the helicopter fell from the sky, directly hitting the riverside drinking establishment.

Witnesses said it seemed to fall straight down into the roof of the pub. The crash Friday at around 10:30 p.m. sent dozens of patrons fleeing through a cloud of dust. Witnesses spoke of people streaming out of the building covered in blood, with gashes and other injuries.

Ambulances rushed to the scene, taking the injured to nearby hospitals.

Local resident Paul Dundas, 26, said he heard a loud bang and looked out of his window to see a plume of dust rising above the pub.

"At first I thought it was a firework," he said.

"People were covered in blood and dust. Other people were dragging them away from the bar and trying to get them out. Everyone was in shock, but people were helping and asking strangers if they were OK. I saw a couple help each other clean up their faces."

Chief Constable Stephen House said three of the dead were found in the helicopter, which was carrying two police officers and a civilian pilot.

They "were our colleagues," House said, bowing his head and taking a long pause and swallow.

He said the five other fatalities were found inside the building and that 14 people remained hospitalized with serious injuries.

House wouldn't say if more people are believed to be inside the severely damaged pub. He said the helicopter is still "dominating the whole space" in the one-story building and that police won't know the situation until the wreckage is cleared away.

It wasn't immediately clear what the helicopter was doing in the area prior to the crash. Police and air safety investigators say it's too early to speculate on why the Eurocopter EC135 T2 helicopter came down on the pub's roof, close to a helipad on the bank of the River Clyde.

Police said the scene was extremely dangerous because the building was unstable.

"We are dealing with a very sensitive investigation and operation here," House said. "It will go on for many days yet."

The Clutha pub was packed at the time. Police said there were well over 100 people inside the bar at the time of the crash, listening to the tunes of local ska band Esperanza.

With the scene cordoned off, groups of people huddled around police tape Saturday, some visibly upset and crying. A blue tarpaulin had been spread on the roof of the pub, but for much of the day the shapes of the blades and mangled fuselage were clearly visible from the street.

John McGarrigle, 38, said that he believed his 59-year-old father, also named John, had died in the crash.

The younger McGarrigle, who described his father as a regular at the bar who sat in the same seat every night, had arrived on the scene shortly after the crash and stayed all night.

"His friend told me she went to the toilet, heard the noise and went back into the bar," he said. "He was gone. There was nothing left where he'd been sitting."

Search and rescue dogs were on the scene throughout Saturday, with more than 100 firefighters participating alongside expert crews trained in shoring up unstable buildings.

Witness David Campbell, 22, said he was approaching the pub with friends when he heard a loud bang.

"We ran up to bar and saw lots of people coming out — dozens," he said. "Some were injured I saw one man with a very bad head injury. There was blood, blood, blood. I'm not sure if he has made it.

He said some residents ran into the pub to try to aid victims.

"I saw some people smash a window beside the blocked door and help people get out," he said. "It was a stressful situation, but there was a sense of purpose about it."

Resident Karen Smith watched events unfold from her balcony and said a nearby bridge over the river was lined with ambulances after the crash.

"We could see paramedics being helped by ordinary people. They were lifting and helping the wounded to ambulances," she said. "I could hear raised voices, and I suppose it was chaotic, but you could see people mucking in together."

She said she couldn't believe her eyes when she realized it was a helicopter that caused the disaster.

"The yellow tips of the blades were clearly sticking out of the building and I could see the word 'police' written on the side," she said.

Members of the ska band Esperanza joined others in praising the rescue effort.

"Waking up and realizing that it is all definitely horribly real," the band wrote on its Facebook page. "Despite the situation everyone was so helpful and caring of each other. The police, ambulances, firefighters all did a stellar job and continue to do so today."

The twin-engine Eurocopter is widely used by police and ambulance services.

In 2007, a Eurocopter EC135 T2 crashed in southern England. The pilot and his wife were unhurt, but the aircraft was badly damaged. Britain's Air Accidents Investigation Branch said there had been a failure of the autotrim system which maintains the aircraft's position. The agency recommended changes to correct the problem.