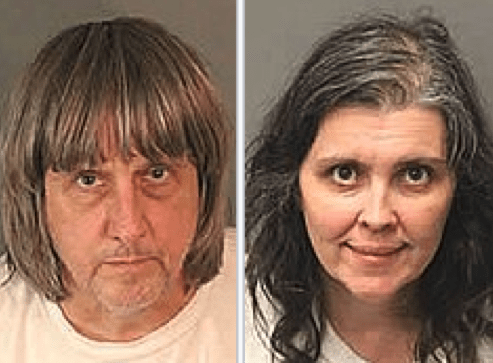 PERRIS, Calif. – The California “house of horrors” parents who abused and tortured some of their 13 children face being sentenced to 25 years to life in prison Friday, a day after the 911 call from one of their daughters which helped lead to their downfall was released.

David and Louise Turpin pleaded guilty in Riverside County Superior Court in February to torture and other abuse and neglect. The circumstances were so severe it stunted their children’s growth, led to muscle wasting and left two girls unable to bear children.

Their 17-year-old daughter was able to escape the filthy home in a middle-class section of Perris, about 60 miles southeast of Los Angeles. She jumped out of the window and used a cell phone to alert authorities. ABC News obtained the 911 call the girl made to authorities, pleading for help.

“I’ve never been out,” the teen told the dispatcher. “I don’t go out much.”

“Sometimes we live in filth and sometimes I wake up and I can’t breathe because how dirty the house is,” she told the dispatcher.

When asked by the dispatcher when the last time she took a bath, she replied, “I don’t know. Almost a year ago.”

Police arrived at the home in January 2018 and were shocked by what they saw. A 22-year-old son was chained to a bed and two girls had just been set free from their shackles, FOX News reported. The house was covered in filth and the stench of human waste was overwhelming, police said.

Authorities said the children barely left the home except for the occasional family vacation, slept most of the day and were primarily kept in their rooms.

The children said they were beaten, caged and shackled to beds if they didn’t obey their parents. The children ranged in age from 2 to 29.

David Turpin, 57, had been an engineer for Lockheed Martin and Northrop Grumman. Louise Turpin, 50, was listed as a housewife in a 2011 bankruptcy filing.

It was not immediately clear if any of the children will attend the sentencing, but they will be offered a chance to speak or can offer written statements to be read in court.

UPDATE: The couple has been given a life sentence with the possibility of parole after 25 years. Read more here.