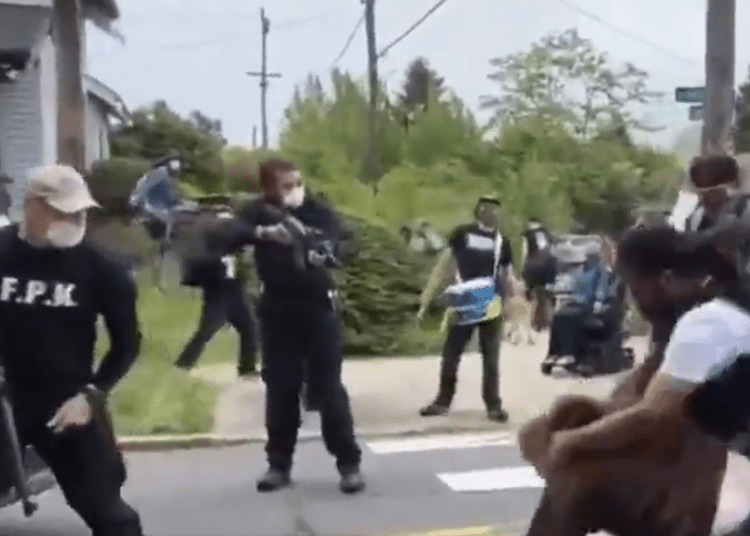 PORTLAND, Ore. — A disabled veteran in Portland is hospitalized with multiple serious injuries after a group of armed Black Lives Matter protesters attacked and beat him. Portland Police Bureau officials reportedly received several calls about the violent acts of the BLM protesters on May 5, Breitbart reported.

Joe Hall, a 53-year-old home handyman, was surrounded by a crowd of BLM protesters armed with AR-15s and AK-47s. Next, they attacked him when he got out of his work truck during a heated exchange, according to FOX 12. He said he was driving through the area where a BLM protest was underway while moving from a completed job to his next assignment. The crowd stopped his vehicle and those of others as they blocked the roadway.

Meanwhile at a Protest in Portland pic.twitter.com/S22mTDyaG6

“All of a sudden these agitators come out, screaming, pounding on my truck,” Hall told FOX 12. He said he attempted to drive around the group but stopped and got out when he thought he hit something.

“By this time I’ve got five people surrounding my vehicle, AR-15s, AK-47s,” said the disabled veteran who served in the Army and Marine Corps. “I pulled my .38 out of my right pocket and pointed it at the ground and told them if a weapon points at me again, I will shoot to eliminate the threat.”

Antifa death squads march through residential streets in Portland brandishing rifles. They point them at a motorist, causing him to draw on them in return. He's beaten to the ground and his gun is stolen. He offers that he's a disabled Marine. pic.twitter.com/L0nTTKuE7t

After pulling his pistol, someone tackled from behind and he was battered. The mob also took his gun away. He said the group began kicking and hitting him.

The veteran said he stood his ground and would do it again.

A resident of the local neighborhood told reporters, “It looked like he was face down and then people were kneeling on top of him,” according to Breitbart.

Hall said he thought he would die during the savage attack. Moreover, he wondered why Portland police didn’t respond after they received multiple calls about the violent nature of the protest.

#Portland
“You f***ed with the wrong group of people!” scream Antifa militants as they smash up this person’s van and hold them at gun point.

Portland police officials said their officers arrived after the large protest group had moved away. By the time they arrived, there was nothing for them to do but to file reports.

“Portland Police attempted to collect as many statements as possible from those involved,” Portland Police Bureau officials said in a written statement. “Officers will document as much of the incidents as witnesses share and will attempt to gather available evidence, including video for follow-up on any criminal allegations.”